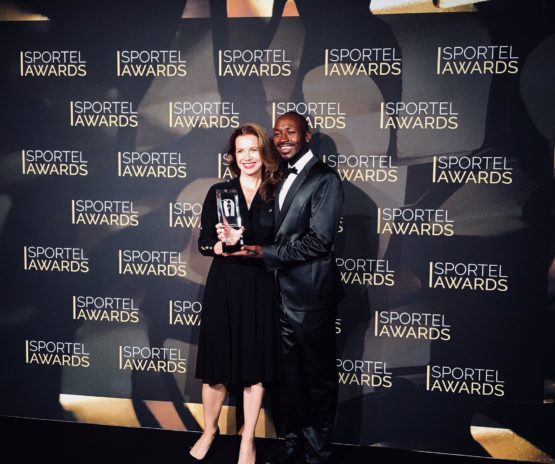 For the fourth consecutive year, the winner of Peace and Sport Documentary Prize was announced at the Sportel Awards, on Tuesday 23rd October 2018, in Monaco. The jury, made up of numerous Champions for Peace, has chosen to reward Jamillah Van Der Hulst’s film “Fighting for Life”.

Jean-Baptiste Alaize, athletics world champion and Champion for Peace, presented the Peace and Sport Documentary Prize to Jamillah Van der Hulsts’s film “Fighting for Life”. The documentary “gives a unique look inside the South- African prison Drakenstein Correctional Center and the impressive work of Dutch boxing coach Sharita van der Hulst in the rehabilitation program for prisoners that are serving heavy sentences” according to the director.

Jean-Baptiste Alaize said: “I am convinced that sport is a universal language. Everyone understands and accepts the same game rules. It was a pleasure to be able to watch these magnificent documentaries that demonstrate that sport is a sustainable tool to obtain peace.”

“Fighting for Life » was selected by a jury made up of numerous Champions for Peace. Two other films were competing for the Prize. “Men in the Arena” by J.R. Biersmith that tells the very moving story of two Somalia National Soccer Team friends chasing professional dreams despite all the obstacles and “Stranger” by Kenneth Michiels. The movie focuses on the life of Moussa, an immigrant who’s just arrived from Senegal, and is the football coach at BX Brussels of Vincent Kompany.

Last year, the winner was “Girl Unbound: The War to Be Her” (2017). This film explores the world of Maria Toorpakai Wazir, international champion of squash and Champion for Peace. In Waziristan, a mountainous region of Pakistan, Maria defies the Taliban by disguising herself as a boy so she can play sports freely. Before that, in 2016, “Speed Sisters” was awarded. Thedocumentary follows the adventures of the first 100% female race car driving team in the Palestine Rally.

Since 2014 in partnership with the Sportel Awards, Peace and Sport promotes directors tackling themes to demonstrate that sport can actually move barriers and norms in society.