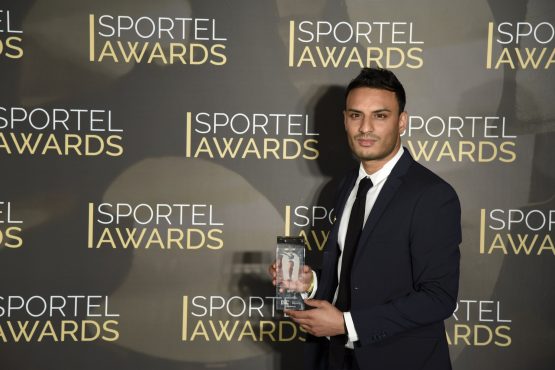 For the third consecutive year, the winner of Peace and Sport Documentary Prize was announced at the Sportel Awards, on Tuesday 24 October 2017, in Monaco. The jury, made up of 25 Champions for Peace, has chosen to reward Erin Heidenreich’s film « Girl Unbound : The War to be Her ».

Kashif Siddiqi, Pakistan International Football player and Champion for Peace, presented the Peace and Sport Documentary Prize to Erin Heidenreich’s film “Girl Unbound: The War to Be Her”. This film explores the world of Maria Toorpakai Wazir, international champion of squash. In Waziristan, a mountainous region of Pakistan, Maria Toorpakai defies the Taliban by disguising herself as a boy so she can play sports freely. But when she becomes a rising star, her true identity is revealed, bringing death threats on her and her family. Undeterred, they continue to fight for their freedom.

Kashif Siddiqi declared: “As a Champion for Peace, I am very proud to reward a film portraying Maria Toorpakai’s commitment to promoting women access to sport. Maria is a Champion for Peace too, her struggle is inspiring and I share her ideas. For her, sport is a valuable channel to promote gender equity, respect and solidarity.”

In a message, Maria Toorpakai added: “I am proud to be a Champion for Peace with Peace and Sport and I wish I could be here in person with you all. I am humbled and with great honor, I want to thank Erin Heidenreich and her team for telling with talent the struggle of my life. Being a girl who wants to play sports and be yourself was not easy but great things happen when we are true to ourselves.”

“Girl Unbound: The War to Be Her” was selected by a jury made up of 25 Champions for Peace including Paula Radcliffe, Marlene Harnois, Sarah Ourahmoune, Pernilla Wiberg, Jean-Baptiste Alaize and Pascal Gentil. Two other films were competing for the Prize. « Olympic Pride, American Prejudice », by Deborah Riley Draper, is the story of the 18 African-American athletes who participated in the 1936 Berlin Olympic Games, defying Nazi Aryan Supremacy and Jim Crow Racism. « Fighting for Peace », by Joost van der Valk and Mags Gavan, is about youth attempting to escape a life of drugs and bloodshed in Rio De Janeiro’s most violent favela.

Last year, the winner was “Speed Sisters”, a documentary that follows the adventures of the first 100% female race car driving team in the Palestine Rally. In 2015, the Prize awarded “Into the Sea”, a documentary recounting how three women athletes introduced surfing into Iran. Peace and Sport continues to promote directors tackling themes to demonstrate that sport can actually move barriers and norms in society.

Watch the live video of the ceremony here