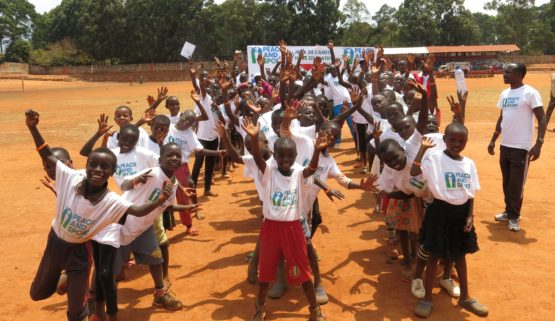 Pictures of the Friendship Games are accessible here.

The 10th edition of the Friendship Games toured through the roads of Burundi, stopping off in Gitega, Makamba and Bujumbura. Organized by Peace and Sport in partnership with the Burundi National Olympic Committee, this event which took place from 12-18 August aimed to encourage the use of the Peace and Sport Methodology in extracurricular school programs and – more widely – to encourage cohesion in the Great Lakes region. Champion for Peace Vénuste Niyongabo, Olympic gold medallist in 5,000 metres, took part in the itinerant Games, which visited his hometown of Makamba.

In one week, the Games trained 50 teachers and 300 young people in the Peace and Sport Methodology, designed to foster inclusion, dialogue and respect through sport in seminars for adults and “peace through football” workshops for children. Each of the 50 teachers will be responsible for transmitting this methodology in more than 20 schools in the provinces of Gitega, Makamba and Bujumbura during extracurricular activities, benefiting more than 5,000 children.

“It’s very important for me to share the positive values of sport, such as respect and dialogue, with my community. Through fun and instructive exercises, Peace and Sport offers teachers a simple and adaptable tool for children and young people to transmit these values. As a Champion for Peace it is a great pleasure for me to support this new national pilot project.”

Vénuste Niyongabo participated in several editions of the Friendship Games. He will share this experience at the Peace and Sport International Forum, which will celebrate the tenth anniversary of the Champions for Peace club, from 11-13 December in Monaco.

Each step of the Games finished with a peace march for adults and children to raise awareness about the positive impact of sport on society. In partnership with the National Olympic Committee of Burundi and the local athletics club, the Olympic medallist and the values he upholds attracted several hundred people to participate in these peace walks.

“The National Olympic Committee and I are very pleased to support this 10th edition of the Friendship Games, which I am sure will help the cause of sport for peace. As President, I have always supported programs aimed at improving social cohesion. Peace and Sport has been working in this direction for many years and we act alongside them.”

The Peace and Sport Methodology will be converted into an App by the French digital sports leader, MyCoach Sport. The goal is to equip coaches and teachers around the world with adapted digital solutions that publicise peace-related training and knowledge through sport. The first version of the app will focus on peace through football before exploring other sports. This innovation is the first app in the world specifically for “Peace Through Sport” and it will be tested in different contexts where Peace and Sport implements its field programs, notably in Colombia, in the Za’atari refugee camp in Jordan, and the African Great Lakes Region. Its official launch will be at the Peace and Sport International Forum which is being held in Monaco from 11 – 13 December 2019.

Since 2009, Peace and Sport has supported six training centres in the Great Lakes region of Africa with the support of National Olympic Committees, international and national sports federations, local authorities and Champions for Peace.  Once a year, young people from these centres come together for the Friendship Games marked by peace-through-sport activities, cultural exchanges and peacebuilding events. So far, more than 1,700 young people have had the opportunity to participate, compete, forge intercultural dialogue and experience the power of sport for peace. The 2019 Games aim to encourage use of the Peace and Sport Methodology in extracurricular programs in Burundian schools through a new national pilot project.