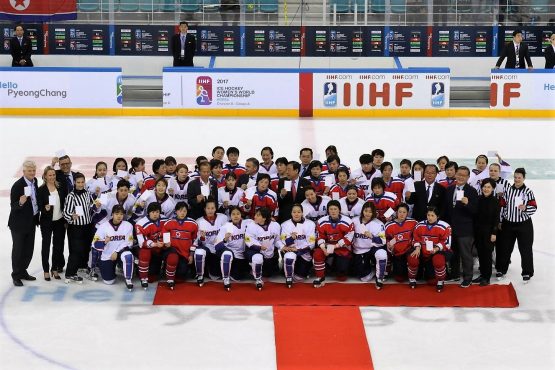 Peace and Sport, the politically neutral organisation, dedicated to promoting sport as a tool for peace, in cooperation with the International Ice Hockey Federation (IIHF) have this week brought together athletes from both North and South Korea, inviting them to stand united behind a common goal of world peace.

Joel Bouzou, President and Founder of Peace and Sport along with René Fasel, IIHF President asked both National Teams to pose together for a picture following their match at the Women’s World Ice Hockey Championship on April 6 during the PyeongChang 2018 Ice Hockey Test Event, in support of Peace and Sport’s #WhiteCard campaign.

The campaign, which so far this year has reached over 38 million people worldwide, asks athletes, International Federations (IFs) and everyone involved in sport to pose for pictures with #WhiteCard, before sharing them on social media.  It is anchored around April 6, the United Nations-recognised International Day of Sport for Development and Peace (IDSDP), and hopes to raise awareness of global peace efforts through sport.  As well as the #WhiteCard campaign, Peace and Sport encourages the development of sport-based initiatives around the IDSDP, collating the projects and providing inspiration and guidance on its april6.org platform.

The ice hockey #WhiteCard picture is a considerable achievement for Peace and Sport’s campaign, following the latest developments in the international relations between North and South Korea. Peace and Sport’s long-term goal of leveraging sport’s influence for social unity has gathered increased momentum year after year and 2017’s campaign has helped to elevate awareness even further.

“This is a very important moment for the peace through sport movement. It is a perfect example of sport being used as a tool to change the world for the better and to bring people together under a common goal.

“As we continue to build on the success of this year’s #WhiteCard campaign and april6.org platform, we hope that more and more people will follow our lead and use their role within society to change our world.  Now more than ever we need to mobilize behind a belief in peace, to unite as one, and to spread the message far and wide.”

“It was really cool to take the picture. Everyone was mixed in, and I think this could be a very significant occasion.”

This news comes during SportAccord Convention 2017, where Peace and Sport has been on the ground encouraging the leading names in IFs from across the world to support the peace through sport movement. IF Presidents have been visiting the Peace and Sport booth and posing for images with #WhiteCards, spreading the movement across their sports.  The organisation also signed a memorandum of understanding (MOU) with the International Basketball Foundation (IBF), International Boxing Association (AIBA) and World Bridge Federation (WBF), that will see the IFs collaborate on global peace initiatives.

Other events to mark IDSDP, included a press conference in the UN Headquarters in New York, the mobilization of students in Monaco, through the Ministry of National Education, Youth and Sport (DENJS) and the Princess Charlene Foundation, and Peace and Sport leading discussions at major conferences in Colombia and Guatemala.