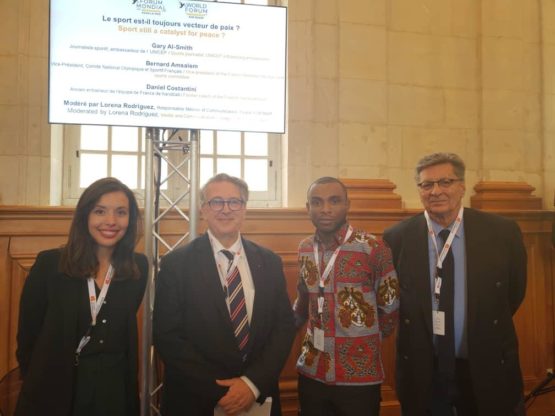 Peace and Sport questions “Sport, still a catalyst for peace?” at the World Forum Normandy for Peace

In the framework of the D-Day 75th anniversary commemorations, Peace and Sport took part in the second edition of the World Forum Normandy for Peace in Caen, on 4 – 5 June. This Forum is an annual opportunity for reflection and discussion on global tensions and peace-building. It is led by experts in geopolitics, alongside representatives of States, the academic world and civil society.

Peace and Sport moderated a debate entitled “Sport, still a catalyst for peace?” highlighting the need to invest more in sustainable projects aimed at fostering dialogue and social cohesion. While the rise of nationalisms in Europe is also expressed in the stadiums, the radicality is regularly observed among the supporters of certain sports. This observation lead to question the current role of sport as peace vector. The debate explored how sport can be a factor of peace and freedom thanks to the contribution of Gary Al-Smith, sports journalist and ambassador for UNICEF, Bernard Amsalem, Vice-President of the French National Olympic and Sports Committee and Daniel Costantini, former coach of the French handball team.

The World Forum Normandy for Peace was attended by Nobel Peace Prize Laureates Mohamed El Baradei, Denis Mukwege, Leymah Gbowee and Jody Williams who launched a public call for awareness of the need for lasting peace “Normandy for Peace Manifesto”, in partnership with the Indian think tank Strategic Foresight Group.

The Normandy for Peace initiative is the result of the Region’s desire to continue the work which began in 1945 to promote remembrance in Normandy and to become a laboratory for lasting peace. In 2018, Peace and Sport participated to the first edition of this world forum speaking about the role of sport in peacebuilding.