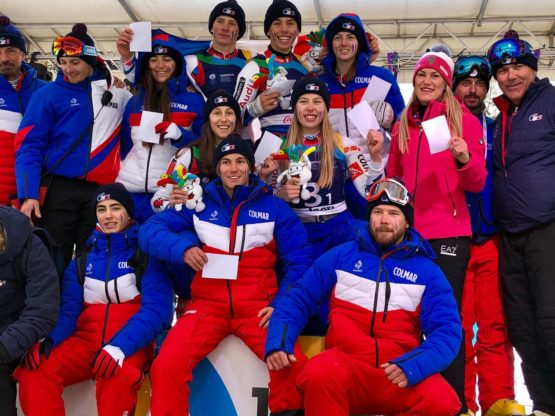 From 9 to 16 February the 14th Winter European Youth Olympic Festival took place in Sarajevo. The EYOF is the first top European multi-sports event aimed at young athletes aged 14 to 18 that takes place under the Olympic flag. Champion for Peace Marlène Harnois came to East Sarajevo to represent Peace and Sport. After a powerful speech about the “real magic of sport” for the closing ceremony, leaders of Bosnia Herzegovina tripartite Presidency Milorad Dodik, Željko Komšić and Šefik Džaferović and athletes came together for a symbolic #WhiteCard. 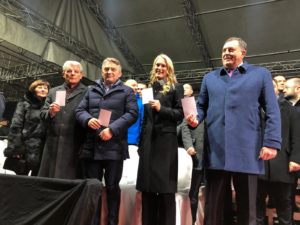 The Taekwondo Olympic Medalist Marlène Harnois explained: “We are here because we share the same passion: we are united by the power of sport. And the real magic of sport lies in the fact that it produces the same emotions endlessly every time, regardless of the competition or the setting.”

Joël Bouzou, President and Founder of Peace and Sport, explained: “Sport is a neutral and universal platform that creates a safe and inclusive space for everybody, particularly for youngsters. It is a powerful catalyst for peace. Thus, I am pleased that the EYOF joined our efforts promoting the positive power of sport through the #WhiteCard, the symbol of the sport for development and peace movement.”

And it is not the first time Peace and Sport and the EYOF support each other. In 2015, young athletes and visitors were able to take part in the #TheCareSquare fundraising campaign during the EYOF, by purchasing one of the 1,906 photos sold by the organization. The campaign was aimed at financing the 2015 Peace and Sport African Great Lakes Friendship Games, a cross-border sporting event, aimed at promoting peace, cultural awareness and cross-border friendships.