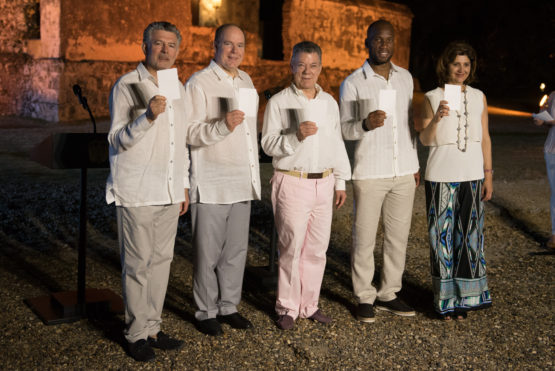 PEACE AND SPORT LAUNCHES THE 2018 #WHITECARD CAMPAIGN WITH DIDIER DROGBA

This international initiative invites the entire world to show support for the peace-through-sport movement using the ‘white card ‘ symbol.

At an official meeting, Joel Bouzou, President and Founder of Peace and Sport and Didier Drogba, Champion for Peace joined HSH Prince Albert II of Monaco, Mr. Juan Manuel Santos, President of the Republic of Colombia and winner of the Nobel Peace Prize in 2016 and Mrs Maria Angela Holguin, Colombian Minister of Foreign Affairs. Together, they all held up a #WhiteCard which – contrary to the red card – symbolizes inclusion, equality and peace.

The 2018 campaign was launched in Colombia, a fertile land for peace through sport

Peace and Sport launched the 5th edition of its digital #WhiteCard campaign in Cartagena in Colombia, with the support of Champion for Peace Didier Drogba and H.S.H. Prince Albert II of Monaco, as well as Mr. Juan Manuel Santos, President of the Republic of Colombia and 2016 Nobel Peace Prize-winner, and Mrs Maria Angela Holguin, Colombian Minister of Foreign Affairs.

“I am very happy here to be in Cartagena to launch a message via the symbol of the #WhiteCard and to remind people that sport is an invaluable tool for peace and development the world over. As a Champion for Peace, I want to use my voice to unite young people around the positive values of sport and I invite everyone who supports the peace-through-sport movement to hold up a #WhiteCard.”

Joël Bouzou, President and Founder of Peace and Sport added:

“Launching this new #WhiteCard campaign in Colombia, a country that’s rebuilding after more than 50 years of armed conflict, is highly significant. This year’s theme entitled “Be part of what matters, hold up your #WhiteCard!” encourages all of us to show support for the peace-through-sport movement and for one and all to take action at their own level.

Each year, we are immensely proud to count on Champions for Peace like Didier Drogba, who tirelessly work to promote our message: namely that sport can be an instrument for change throughout the world.”

Give your support to the peace movement

From now until 10 April, everyone is invited to take a selfie waving a “white card for peace”, then to post it on social networks with the #WhiteCard hashtag.

Many celebrities from the world of sport such as Roger Federer, as well as Champions for Peace like Christian Karembeu and Balla Dieye have already raised their #WhiteCard. 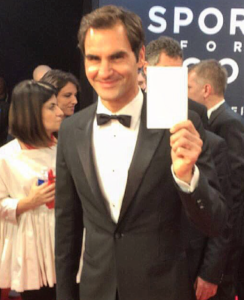 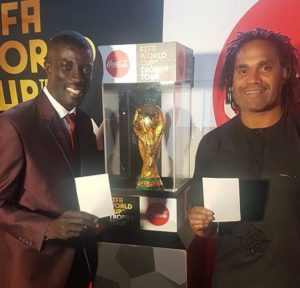 Last year, #WhiteCard crossed over borders to reach 43 million people worldwide on social networks, including high level athletes, international and national sports federations, diplomats and government representatives. The #WhiteCard campaign captures the attention of millions of people each year through social networks, especially on the International Day of Sport for Development and Peace, celebrated on April 6.

Peace through sport in Colombia

The 2018 #WhiteCard campaign was launched during an official visit by Monaco to Colombia for the signature of a Memorandum of Understanding between the Principality of Monaco and the Republic of Colombia aiming at developing sports activities for social inclusion.

This unprecedented collaboration led by the Colombian Ministry of the Foreign Affairs will be implemented by Peace and Sport. It aims at optimizing a peace-through-sport program to help Colombian youth avoid becoming roped into violence and armed conflict (click here for full press release).