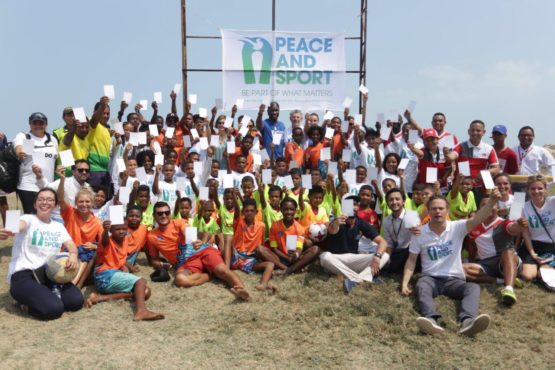 Peace and sport, the principality of Monaco and DIDIER DROGBA  take action for peace in Colombia

Peace and Sport will implement the official agreement signed this weekend by the Principality of Monaco and the Republic of Colombia. In presence of H.S.H. Prince Albert II of Monaco, the Colombian Minister of Foreign Affairs H.E. Maria Angela Holguin and H.E. Mr. Bernard Fautrier as representative of the Ministry of Foreign Affairs and Cooperation of Monaco signed a Memorandum of Understanding which designates Peace and Sport as implementation partner and which promotes the development of sports activities for social inclusion.

This signature ended a day rich in peace-through-sport activities bringing together more than 150 young Colombians on a ‘Sport Simple’ beach soccer and a rugby tournament, with the participation of Didier Drogba, Champion for Peace.

Mrs Maria Angela Holguin, Colombian Minister of Foreign Affairs, Joel Bouzou, President and Founder of Peace and Sport and Didier Drogba, Champion for Peace, raising a #WhiteCard with Colombian youth, as a symbol of the peace through sport.

Peace and Sport’s commitment to Colombia

Concretely, Peace and Sport collaborates with the Colombian Ministry of Foreign Affairs to optimize an outstanding peace-through-sport program that has been underway in the country for many years. This new program works for the wellbeing of communities, particularly the most vulnerable communities, to prevent young people engaging in violence and armed conflict.

Peace and Sport brings its expertise to peace-through-sport initiatives developed by the Colombian Ministry by mobilizing its network of Champions for Peace and adding its experience of field programs. “Sport Simple” activities and initiatives will be developed, whereby the rules and equipment of games are adapted to local resources and environments, with the objective of transmitting values.

For Joël Bouzou, President and Founder of Peace and Sport:

“ This commitment at the highest level is proof that political leaders are increasingly aware of the power of sport to promote social change, development and reconciliation. Sport can be an exceptional tool for dialogue and fraternity when the right combination of stakeholders are involved. In this way, an unprecedented cooperation with the Ministry of Foreign Affairs has been formed, which will implicate dozens of local NGOs which have been working to pacify Colombian young people for years.”.

Didier Drogba and sixty of young people from the Colombian NGOs Amigos del Mar, Fútbol con Corazón and Ider Cartagena spent the morning on the beach of Bocagrande in Cartagena, building a beach soccer pitch using Sport Simple tools made from recycled materials. Peace and Sport then brought together 150 young Colombians living in difficulty, for an “inspirational” conference by Didier Drogba, who talked about his career, his combat for peace, the values of sport and the way in which they can help make their country more peaceful.

“Colombia works hard to build peace and regards youth as a priority and sport as a tool. This trip to Colombia has enabled me to converse with these young people who have known only war, violence and fear. I want to share my experience from Ivory Coast and my values to tell them that sport brings people together and so contributes to peace. It can help them to build a future based on the values of respect and friendship.”

10 years after it first took action on the ground, Peace and Sport is once again working for peace in Colombia in association with the Principality of Monaco and the Colombian Ministry of Foreign Affairs. The project was elevated to highest State level following a meeting between the Founding President of Peace and Sport Joel Bouzou and 2016 Nobel Peace Prize-winner and President of Colombia Mr. Manual Juan Santos in February 2017. Discussions at this meeting focussed on tangible ways to implement the peace agreement signed with the FARCS in November 2016.  This joint project was given further credence by the Colombian Ministry of Foreign Affairs’ visit to the Principality of Monaco to attend the 10th Peace and Sport International Forum (6 December 2017), when H.S.H. Prince Albert II of Monaco presented the Ministry with the Peace and Sport Award for “Diplomatic Action of the Year”.

As the Colombian Ministry of Foreign Affairs was not able to sign with a counterpart, a proposal was made to sign a Framework Agreement with the Principality of Monaco, designating Peace and Sport as the partner organization overseeing the implementation. 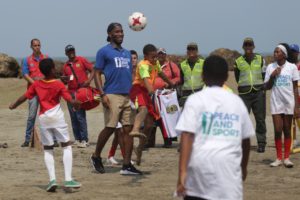 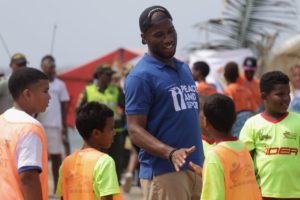 Download photographs and TV footage of this special day in Colombia: