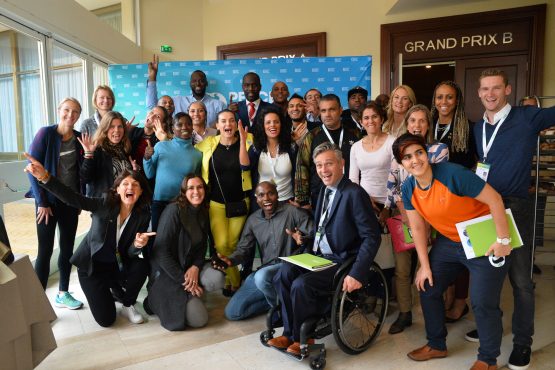 32 Champions for Peace united for one cause

32 Champions for Peace representing 17 different sports from 20 countries over 4 continents are attending the 9th Peace and Sport Forum in Monaco, which began on Wednesday.

Following the solemn and symbolic Peace Walk on Wednesday in the presence of HSH Prince Albert and three Nobel Peace Prize-winners from Tunisia – Abdessatar Ben Moussa, Mohammed Fadhel Mahfoudh, and Ouided Bouchamaoui – Champions for Peace have been actively participating in the Forum, sharing their experiences and their initiatives, each at their own level, each with conviction, whether in their own countries or on a wider scale.

Actions such as those by rugby player Jean-Francois Tordo in Madagascar, by squash player Maria Toorpakai through her Foundation, and Peace and Sport’s workshops in France targeting young people with difficulty in social insertion.

Chinese sailor Guo Chuan would be proud of these actions. The Champion for Peace lost at sea at the end of October whilst attempting to beat the world record for crossing the Pacific solo was paid a moving tribute by all participants.

Florence Masnada, France, Olympic medallist in alpine skiing: “The richness of discussions between the champions from all disciplines and all countries has truly marked me. Each individual story, often difficult, fuels debate. Projects put forward are strong and actions are concrete, setting the example that everyone can take ownership of peace. Peace and Sport’s action is taking on another dimension.”

Maria Toorpakai, squash, Pakistan: “Peace and Sport is a great idea. It’s something unique which unites all these athletes around a common cause: bringing good through changing mentalities. Without sport, I wouldn’t be the person I am now and we must set an example.”

Angel Rodriguez, athletics, Spain: “We’re having very productive discussions that enable us to learn from the examples of others so we can put them in place in our countries. Personally, I want to organize something in Spain. The Forum is productive ground for forging links between Champions for Peace.”

Marlene Harnois, taekwondo, France: “Every Champion for Peace has their own experience. Yelena Isinbayeva, for example, does a lot in Russia. Hearing everyone talk about their action pushes us to go further, by campaigning for the same values, using sport as a tool.”

Helena Suková, tennis, Czech Republic: “It’s important to have these discussions to prepare for the future. Sport and peace and are ideas that lead to action. Proof that it’s possible to move forward and that these aren’t just words.”