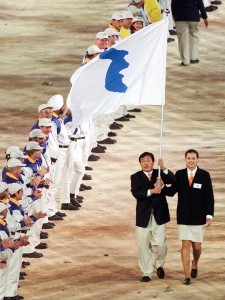 Flag bearers Jang Choo Pak (L) of North Korea and Eun-Soon Chung of South Korea carry a special flag with the image of the Korean peninsula, at the head of their joint delegation during the opening ceremony of the 2000 Summer Olympics in Sydney 15 September 2000. North and South Korean delegations marched together for the first time at the Sydney games. AFP PHOTO/Jeff HAYNES