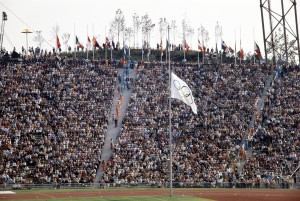 The olympic flag and other national flags fly at half mast in the Munich Olympic stadium on September 06, 1972 during the memorial ceremony for the victims of the hostage-taking of Israeli team members by a Palestinian commando the day before, during the Munich 1972 Olympic Games. Palestinian terrorists of the “Black September” group had stormed on September 05, 1972 the Israeli athletes quarters, killed two and took nine other members of the Israeli Olympic team hostage the previous days. A freeing action of the German police forces on the Fuerstenfeldbruck airport near Munich had failed overnight September 06, leaving all hostages, five of the Palestinian kidnappers and a German policeman dead.