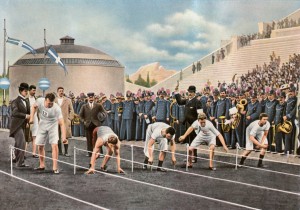 Artist’s rendition of the finalists of the 100m dash, each in a different starting position, waiting for the official to fire his gun during the first Olympic games that took place from 06 to 15 April 1896 in Athens. American Thomas Burke (2nd L) won the gold medal with a time of 12 seconds, using a starting technique that was used for many years after until the invention of the starting blocks.