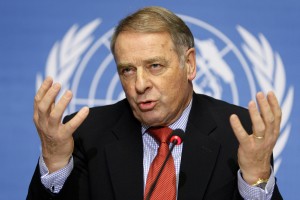 Special Adviser to the United Nations Secretary-General on Sport for Development and Peace, Adolf Ogi gestures during a press conference after ending his mandate within the United Nations 10 December 2007 at the UN Office in Geneva. Ogi concludes his activities after seven years of service. AFP PHOTO / FABRICE COFFRINI