The #WhiteCard has great success at FISE

“We couldn’t have dreamt it better. For three days, from 19 – 21 April, the International Extreme Sports Festival (FISE) wrapped up Peace and Sport’s 2019 #WhiteCard campaign in Hiroshima, Japan. The target of US atomic bombings during the Second World War, later proclaimed a “City of Peace” by the Japanese Parliament in 1949, is a city that has rebuilt itself, stone after stone, often using sport to construct its international image.

Over these three days of spring, in its own way our event helped the cause of peace through sport through its lively, friendly, joyful and enthusiastic vibes. It was the official end to the #WhiteCard campaign, whose impressive results demand respect, as it reached nearly 98 million people on social media around the world this year.

For the Hurricane Group, founder and organizer of FISE, our support for Peace and Sport and #WhiteCard makes sense. We have been partners since last year, although the ideals of peace, sharing and inclusion have always been part of our DNA and our sports. BMX Freestyle, skateboard, roller freestyle, parkour, scooter, wakeboard and mountain bike are all individual disciplines, but they are usually done among friends or between communities, with a common desire for sharing. At FISE, professionals and amateurs participate together in the same playing areas. Access is free so anyone can attend. The most experienced players help beginners. Motivation is transmitted from person to person with a mutual wish to learn and progress without trying to defeat the opponent.

At the end of the 90s, when we started to incorporate urban disciplines into FISE. We brought them all together in one unique event. We tried to break down the barriers. People got to know each other. They discovered that they could advance together. They understood that, together, they were stronger. Today, the IOC and international sports federations are interested. BMX Freestyle Park and Skateboarding will make its Olympic debut next year at the Tokyo Games as a new sport.

Our sports bring hope. They embody youth determined to enjoy life in a spirit of peace and sharing. We fall, we get up and we start again. I haven’t forgotten the joyful looks exchanged among participants and spectators in China and Saudi Arabia, where we set the scene and transmitted the pleasure of our events. In Hiroshima on Friday 19 April 2019, spectators and officials joined with athletes to participate in the “FISE Riders for Peace Challenge”. And they all held up a white card. What a successful closing event for the #WhiteCard campaign at FISE Hiroshima.” 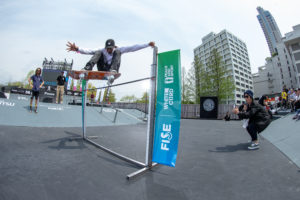 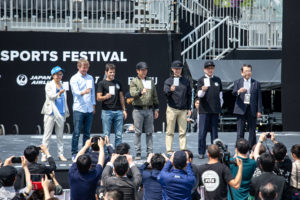