The Legacy of the Rio 2016 Refugee Olympic Team

A lot has happened since Rose Lokonyen walked into the Olympic Stadium as a flag bearer of the Rio 2016 Refugee Olympic Team. Rose was amongst the 10 athletes from South Sudan, Syria, Democratic Republic of the Congo and Ethiopia that competed at the Olympic Games in Rio de Janeiro. “Participating in the Olympic Games”, she said, “gives us hope to encourage the young generations of fellow refugees who are remaining in the camps to continue their talent.” 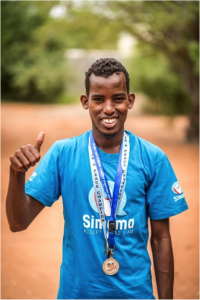 Did the Rio 2016 Refugee Olympic Team leave a legacy behind for the 60 million refugees worldwide? And, if so, how does it look like? Are young refugees being encouraged to continue their talent in sport? Do the runners from the refugee team, for example, continue to train for other international IAAF events? Would they ever be able to qualify as long as they have the refugee status (i.e. not representing any of the IAAF member federations)? What is the status of refugee athletes in the world of international sport events, outside the Olympic Games?

An example is Mohed, a refugee in his mid 20s, from Somalia. I had the privilege to meet Mohed in Kenya in May 2016. He was born in the world’s largest refugee camp, Dadaab, got married there and is now the proud father of two children. Mohed’s parents were from Somalia, but he has never been in that country and, as a refugee, is considered stateless. Mohed was selected to go to the Tegla Loroupe training camp in Nairobi with the hope of participating at the Olympic Games. Being the breadwinner for five people forced him, after two months, to return to the refugee camp as he needed to work so as to provide for the needs of his family.

Mohed says about this “On one side I have my dream, and on the other, my family; so I chose my family. Maybe I can get another chance.” 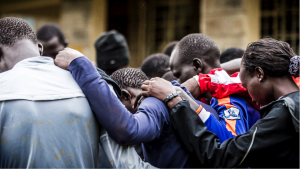 Figure 2: Athletes at the Tegla Loroupe trainings camp praying together at the start of the day (photo: Alex Buisse)

Being in the Tegla Loroupe training camp, he experienced the power of sport for peacebuilding. “Sport taught me many other things. It wasn’t just running, the interactions made things easier. I was very close with another athlete who is of another religion. We slept in one room, we ate together, he wore my clothes, and I his; sports brought us together.”

Mohed has returned to his job at the health post and is the captain of his football team. Besides playing football, he still runs every day. Waiting for another opportunity …

It is on a Wednesday evening in Lausanne that I meet with Ahmed[1], also a fast runner and excellent football player in his mid 20s with a 2-year old daughter. Ahmed fled about a year ago from Afghanistan and ended up, after a long and dangerous journey, in Switzerland. He is one of the approximately 6’000 migrants that is living in the region of Lausanne.[2] Ahmed had to leave his wife and daughter behind and is currently waiting for his Swiss visa that will allow him to start re-building his life. Ahmed participates in our weekly football activities with other Lausanne based refugees. Another group of refugees explored the sport of korfball during the Olympic Week, held every October in Lausanne. Korfball differentiates itself from others by being a truly mixed sport, a team always consists of both men and women. As such, the sport taught the refugees an important message on gender equality. 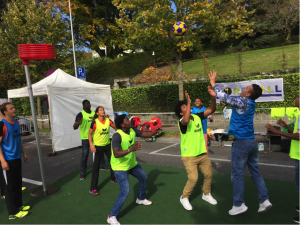 Returning to the initial question: What is the legacy of Rio 2016 of the Refugee Olympic Team? For the large refugee camps in countries such as Kenya, Lebanon and Syria but also for developed countries such as Switzerland? Rio has firmly put the use of sport in a refugee context “on the map” which leads to several opportunities. Let me highlight three of them:

Rio 2016 has left a legacy for the peace and sport industry. This legacy flame now just needs to be lit! As Rose said, “Sport gives us hope, to encourage the young generations of fellow refugees who are remaining in the camps to continue their talent”.

A first step is made by the International Olympic Committee (IOC) announcing an increase of 16% in their solidarity funding for the period 2017 – 2020. This funding includes a new dedicated programme to provide National Olympic Committees (NOCs) with the opportunity to “identify and support a small number of refugee athletes living in their countries to prepare and participate in international competitions.”[3]

This firmly puts the ball in the court of individual countries, urging national sports federations, NOCs, governments and athletes to join forces and define country-specific initiatives. Leveraging the momentum created by the Refugee Olympic Team can truly leave a lasting legacy for refugees in Kenya, in Lausanne or elsewhere in the world.

Not leveraging the legacy of the Rio 2016 Refugee Olympic Team will be both a missed opportunity and a waste of money. Encouraging the use of sport amongst refugees requires more than the availability of funding. It requires a political debate, engaging with volunteers and athletes, being accountable on money spent and many other things. When this sounds rather complicated, I recommend to contact your local sports club, invite a group of refugees, play an hour of sport with them and take it from there…

[1] Original name has been modified for security reasons.