Stephen Murphy
Patron of Tennis for All Uganda

Tennis for all Uganda-The power of tennis to go anywhere

For years I have believed in the huge potential of sport to bring about peace and development. At the same time, I’ve been aware that my sport – tennis – has been playing, at least in my view, a modest role in this mission. When last year I was given the chance to become Patron of Tennis For All Uganda, it was a golden opportunity to add another voice to the call.

This week in Melbourne, the 2017 Australian Open begins. Kampala, Uganda, could hardly be further removed from Melbourne, or the other global epi-centres of tennis. Yet it was there, in this country of 38 million, that in 2012 two young Ugandan coaches began the work of using tennis to create positive change in their country.

To me, Tennis For All Uganda is interesting for two reasons. The first reason is its success so far. My friends Kyobe Julius and Vincee Vine Vinnie have taken challenging first steps, linking tennis with education to uplift about 700 children and their inner-city communities. This in a country with confronting geo-politics – bordered by five other countries, comprising nine major ethnic groups and with one of the youngest and most rapidly growing populations in the world. The second reason Tennis For All Uganda is interesting to me is the model it represents.

Consider tennis – a highly inclusive sport where male and female, young and old, able and disabled, are equal members of one family. Consider the profile that tennis commands – showcased four times every year at Grand Slam events in Melbourne, Paris, London and New York. Consider tennis as a multi-billion dollar industry with multi-millions of stakeholders. Consider, then, its incredible potential to do good.

The key to its potential is not so much its star quality, but that tennis happily reaches down and reaches out to ordinary people, especially children, anywhere in the world. Its adaptability makes tennis extremely accessible. Low-cost, modified and portable equipment means that it can be made available to virtually anyone, anywhere. Take a few old racquets, a few old tennis balls, even just a string line for a net and a reasonably flat piece of ground and you have this global, power sport in action.

Take the global tennis community and ask it to support the modest material needs of an organisation like Tennis For All Uganda, and chances are it will say “yes”. It is a remarkable coming together. When someone in a country like Uganda reaches up, chances are the global power of tennis will reach down, and there will be a meeting.

The organisation has two permanent and passionate coaches and operates currently in three schools around Kampala, including a school for the deaf. The mission of Tennis For All Uganda is fulfilled every day – not only to create good tennis players but to develop good citizens, young people who understand personal responsibility and accountability. The genius of tennis is that the sport alone can teach these things. To be a better tennis player, you need to be a better person. Be a better player, be a better person, build a better community, create a better Uganda.

And create a better world. As I said above, Tennis For All Uganda is interesting also because of the model it represents. There is not much to argue here, except to rhetorically ask what about the organisation could not be replicated in any developing country? Nothing: every aspect of it is universal. It does take a few inspiring people like my friends Vincent and Julius.

Whether these people are in Africa, Asia or Latin America, when they extend their hands, tennis should be able to extend its hand back. It is certainly happening every day in Uganda. 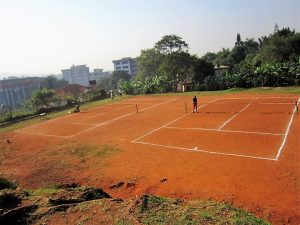 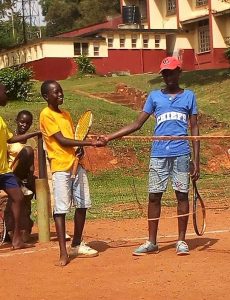