“Show us where you play your peace” with a #WhiteCard

Since the launch of the #WhiteCard campaign 4 years ago, more and more people have identified with the values of it and today, more than 28 million people have seen it on internet. This year, once again, Champions for Peace, Heads of State, athletes, celebrities and eminent figures are holding up a white-coloured card as sign of tolerance, unity and commitment to act for a better world.

The diversity of all these stakeholders and their commitment around the entire world has led us formulate this year’s #WhiteCard campaign slogan: “Show us Where you Play your Peace.” The main purpose of this message is to highlight the universal nature of sport and to unite the community of the peace through sport movement around a unique symbol. Therefore, this year, we encourage everybody to share their location alongside their #WhiteCard or to take pictures of themselves with the white card against iconic global backdrops, such as the Eiffel Tower, the Sydney Harbour Bridge or the Empire State Building.

Peace and Sport’s #WhiteCard initiative was launched in spring 2014 and was anchored around the United Nation’s International Day of Sport for Development and Peace (IDSDP), celebrated on 6 April. In the last fourth years, this easy-to-do do campaign have helped to spread our vision of a peaceful world through the values of sport, particularly through social media.

This year, once again, Peace and Sport Champions for Peace are setting the example. Marlène Harnois, Pierre Frolla, Paula Radcliffe, Tony Estanguet, Jean-Francois Tordo and Yelena Isinbaeva are playing the game and joined the viral campaign. Additionally, the Olympians, through my role of President of the WOA and through the International School Sport Federation (ISF), are supporting it.

Since 2014, the #WhiteCard has received a great support from His Serene Highness Prince Albert II of Monaco – the only Head of State who is a five-time Olympian and IOC member – who has encouraged a maximum of stakeholders to join the operation and develop concrete initiatives around April 6.

Today, the #WhiteCard message has echoed in countries which, more than ever, need these ideals of peace, justice, non-violence and tolerance. The President of Colombia His Excellency Juan Manuel Santos himself held up a #WhiteCard at the World Summit of Nobel Peace Laureates last February in Colombia. Additionally, as part of his commitment to the use of sport as a tool for peacebuilding, the Colombian Ministry of Foreign Affairs will organize a #WhiteCard operation and a basketball match on April 6. Girls from the department of Choco, home to all of Colombia’s most prominent armed groups, including the FARC will play against a team from Bogota in order to promote social integration.

The 2017 #WhiteCard operation has also received recognition from other Nobel Peace Prize-winners, such as the former president of Poland, Lech Wales; the Yemeni journalist and human rights activist, Tawakol Karman; and the Tunisian National Dialogue Quartet.

Reaching out to youth, media, and the general public, we will also be present at a number of international events to promote #WhiteCard and the International Day of Sport for Development and Peace.

In Denmark, we will celebrate April 6 and a big number of #WhiteCard will be taken at one of the biggest worldwide sports events: the SportAccord Convention.

Sport is our tool. #WhiteCard is our symbol. Peace is our goal. This year, once again, lets join forces around this symbol and lets spread the values of sport to live on beyond the celebration of April 6. 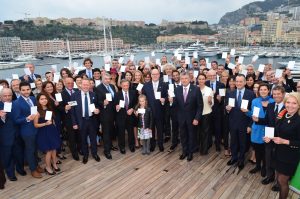 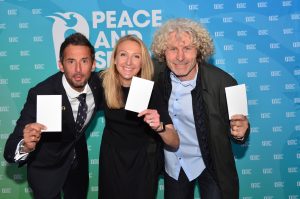