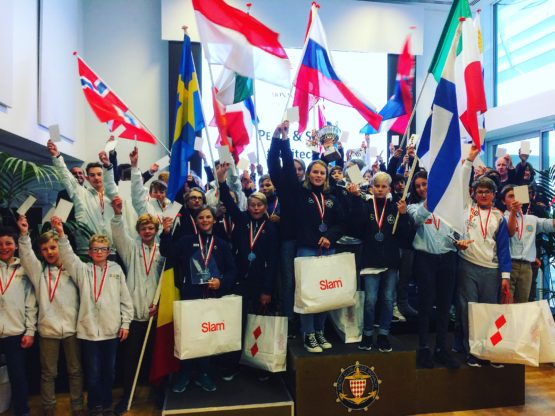 Young sailors join Peace and Sport cause at MOTR 2018

The curtain fell on the 9th Monaco Optimist Team Race organised by the Yacht Club de Monaco with support from FxPro, Eventica, Fon and clothing supplier SLAM. For YCM General Secretary, Bernard d’Alessandri, it was an event “that kicked-off the new year in style and gave the youngest an opportunity to show-off their talent as racers.”

Sixty-four contestants divided into 16 teams from 16 nations put on a show in the main harbour, Port Hercule, amidst the yachts. An original match race for under-14s, it promotes team-work and hosts the most competitive clubs, with Oman Sails making its first appearance along with a group from the Punta del Este Yacht Club in Uruguay, and national teams from Austria, The Netherlands, Belgium and Norway.

Match races for teams of four Optimists tested the technical, tactical and team spirit qualities to the limit, with 150 races completed in light winds, with no respite during the war of nerves that competitors were engaged in.

In the name of sport

During the prize-giving, #WhiteCards were given to all competitors by Peace and Sport representatives. It is a symbol of peace and purity as opposed to the red card so widely used in sport and synonymous with serious misconduct.

“Sport is not just about competition,” notes Joel Bouzou, President and Founder of Peace and Sport. “It’s also about exchanges. That’s why sport has this ability to attract crowds all over the world. In this sense, sport is a fantastic tool for promoting peace”.