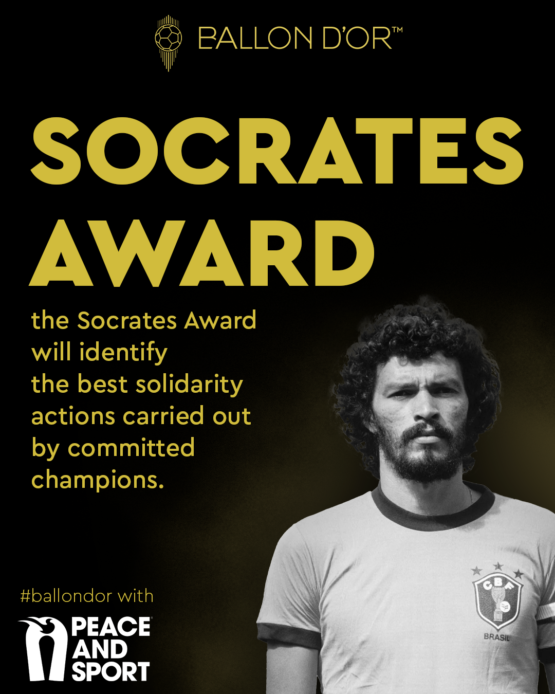 L’Équipe Group has joined forces with Peace and Sport to create a societal award as part of the Ballon d’Or Ceremony: The Sócrates Prize

Professional footballers have become media figures who provoke contradictory reactions: objects of identification or vehicles for celebrating triumph, talent, and effort, they are also subject to much criticism condemning their attitudes, the amount and use of their incomes. In contrast, there is a growing number of athletes who are willing to take control of their image and demonstrate their commitment to building fairer and inclusive societies.

More than ever, the media exposure of football and footballers implies assuming a social responsibility: with the creation of the Sócrates Prize, this is what L’Équipe Group, Peace and Sport and the family of the former captain of the Brazilian team wish to highlight. Inspired by the incredible career of the Doctor and great Brazilian football player Sócrates Brasileiro Sampaio de Souza Vieira de Oliveira, the Sócrates Prize will identify the best actions of solidarity carried out by committed football players.

This year, the jury was made up of Rai, former captain of PSG and the Seleção, Sóstenes, General Director of the “Gol de Letra Foundation”, Joël Bouzou and Jean-Jérôme Perrin-Mortier, President and General Director of Peace and Sport, as well as Jérôme Cazadieu and Pascal Ferré, Editor-in-Chief of France Football. This prize is intended to be a long-term project. A jury of seven people (in addition to the two members of Peace and Sport, two members of the Socrates family and two members of the L’Equipe/France Football Group, a qualified personality will join the jury) will meet each year to choose the winner. The winner will be chosen from the profiles selected in advance and discussed by the jury members.

This prize will be added to the list of the most prestigious individual awards in the world: the Ballon d’Or which has already six trophies and prizes – the men’s Ballon d’Or, the women’s Ballon d’Or, the Kopa Trophy, the Yachine Trophy, the Gerd Müller Trophy and the Club of the Year Prize – and now it has a seventh award in line with changes in our society, a responsible accompaniment to all those who are committed to inclusion and equal opportunities.

Joël Bouzou, President and Founder of Peace and Sport said:
“The media exposure of athletes, and in particular footballers, means that they must set an example and assume a social responsibility. The creation of the Socrates Prize responds to this paradigm shift and to the growing desire of athletes to invest in projects aiming at common good. Since 2009, through the Champions for Peace, Peace and Sport has been working to demonstrate that high-level athletes, beyond their sporting performance, can use their fame to contribute to positive social change. We are therefore very proud to partner with the L’Équipe Group, the Sócrates family and the prestigious Ballon d’Or Ceremony to reward athletes who are committed to building more inclusive and peaceful societies.”

For Rai, President and Founder of Gol de Letra Foundation and brother of Sócrates:
“Sócrates has always believed in the power of sport to mobilize and transform society to make it more equal. He demonstrated this as a player through his fight for the democratization of Brazil during the revolutionary experience of the Corinthians’ Democracy. After his career, he remained very active in supporting Brazilian youth through several social institutions. Almost eleven years after his death, he remains the symbol of a champion committed to a fairer world.

Jérôme Cazadieu, Editorial Director of L’Équipe and France Football, said:
“We wanted to create a prize that pays tribute to the often-invisible work of footballers in supporting initiatives in favor of social integration, environmental development, or aid to populations in extreme poverty or victims of conflict. The Ballon d’Or rewards the best male and female player of the year for their performances but also for their exemplary behaviors. It was necessary to create an award that honors his or her charitable actions.”

About Peace and Sport:
Peace and Sport is an international organization under the High Patronage of H.S.H. Prince Albert II of Monaco, and is aware that athletes are also citizens who can play a role in society. In 2009, Peace and Sport created the Champions for Peace Club, a group of more than 120 athletes of some forty nationalities from all five continents. Heroes, role models and sources of inspiration for young people around the world, they dedicate part of their time, their fame, and their experience as athletes to projects using sport to address social, economic, and educational issues.

About the Ballon d’Or:
Since 1955, France Football, owned by the L’Équipe Group, has organized the Ballon d’Or, the world’s most prestigious individual award. This trophy rewards the best male and female football player of the season. During this ceremony, the Kopa Trophy (best young player), the Yachin Trophy (best goalkeeper), the Gerd Müller Trophy (best striker) and the Club of the Year Prize are also presented.

The 66th Ballon d’Or Ceremony will take place on Monday October 17that 8.30pm, presented by Didier Drogba and Sandy Heribert live on the L’Équipe channel from the Théâtre du Châtelet in Paris.