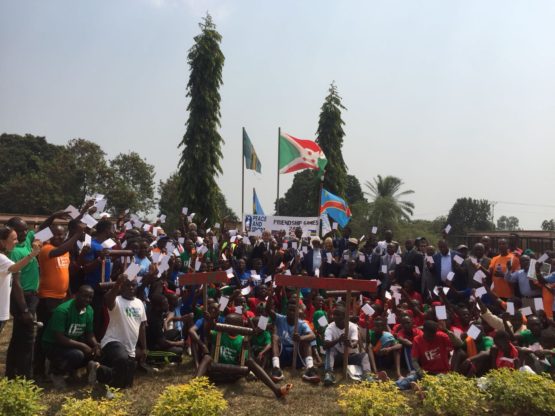 The Friendship Games will bring together Burundi, Democratic Republic of Congo and Rwanda in a unique trans-border edition

Peace and Sport is finalizing the preparation for the 9th Friendship Games edition, which will take place in Bujumbura, Burundi and Uvira, Democratic Republic of Congo (DRC) from 17th to 19th August 2018 in an extraordinary demonstration of trans-border cooperation in the Great Lakes Region.

The Games, which bring together 150 children from youth centers in the areas bordering Burundi, Rwanda and the Democratic Republic of Congo, will see a host of high level authority representatives and diplomats, international sport federations and Champions for Peace join Peace and Sport to endorse the power of sport for positive change.

In an extraordinary demonstration of trans-border cooperation and commitment to promote better inter-cultural dialogue through sport, governments from Burundi and Democratic Republic of Congo accepted to host the 2018 Games. With the attendance of H.E Mr. Bruno Tshibala, Prime Minister, H.E Mr. Papy Niango Iziamay Minister of Sport, Laurent Dupont, Peace and Sport General Director and Olympic medalists and Champions for Peace Marlène Harnois and Isabelle Yacoubou, the Games will be officially opened on Saturday 18th August in Uvira, DRC with a basketball match between youngsters from Burundi and DRC.

Alongside the Burundi National Olympic Committee, eight International Federations will lead a number of sporting activities and seminars in Bujumbura, Burundi. These activities will benefit 150 youngsters and 50 coaches from Burundi, DRC and Rwanda, as a tangible legacy of the federations and as a demonstration of the key role that sport organizations can play generating positive social change.

Around 800 sport items such as balls (table tennis, rugby, football, basketball, baseball), karate and judo outfit, Teqball ONE table will be donated to the five Peace and Sport’s community centers located in Burundi, DRC and Rwanda.

For Marius Vizer, International Judo Federation President (IJF): “The IJF has been actively involved in the Great Lake Region of Africa through its Judo for Peace program. Participating and supporting the Friendship Games is important and clearly shows the way to help all those, who’s life can be changed through sports.”

Antonio Espinós, World Karate Federation President (WKF), declares: “The Friendship Games are an excellent opportunity to promote ideals such as respect and solidarity, and for the WKF it is an honor to be involved in this project.”

The full list of involved International Federations is as follows: