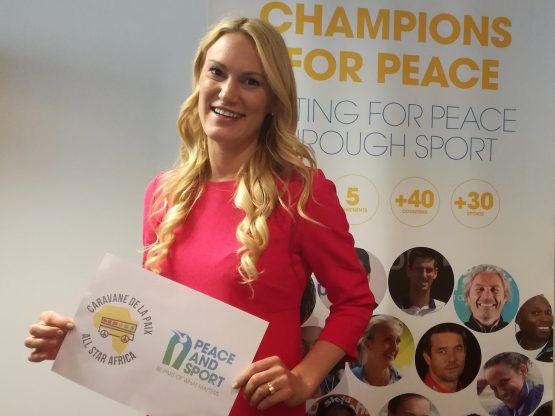 THE FIRST ‘CARAVAN FOR PEACE’ HITS THE ROAD IN SENEGAL

The 1st Caravan for Peace will take to the road in Senegal from 16 – 19 November 2017. At the wheel, Marlène Harnois, Peace and Sport Champion for Peace and Olympic medal-holder in Taekwondo.

In the company of her fellow champions (Ladji Doucouré, Daba Modibo Keita, Balled Dieye, amongst others…) and in partnership with Peace and Sport, the Didier Drogba Foundation and Golden Blocks sponsored by Ladji Doucouré, the purpose of this event is to promote sport on the African continent to help young people to achieve their dreams.

For 3 days, the team will meet the children, families and charity organizations in order to convey the values of solidarity through sport, to inspire youth, and to bring support to vulnerable areas.

After a Conference in Dakar on the topic “Sport, education and culture for development and peace”, the Caravan will travel to meet children in a nursery, a school and a social welfare centre.

It will then bring a Safe Water Cube to the village of Walo Keur Massamba to facilitate access to drinking water for thousands of people. A play-ground will also be opened there to promote the fight against HIV/AIDS and social exclusion.

The Caravan highlights the potential of sport as a tool to promote equality and diversity. Consequently, Peace and Sport will organize Sport Simple workshops led by Champions for Peace, which adapt sports facilities and game rules to local environments, whilst promoting the idea of sport for development and peace.  Golden Blocks will also provide athletics workshops with Ladji Doucouré. Afterwards, locals can attend a martial arts and wrestling demonstration given by the national team and Champions for Peace. To close this first episode of the Caravan for Peace, villagers will be invited to come together and pose for a giant #WhiteCard group photo, to symbolize peace through sport.

The final leg of the Caravan will take place on Goree Island, a highly symbolic place as it was one of the first World Heritage sites managed by UNESCO.

For Marlène Harnois: “The Caravan of Peace conveys a spirit of friendship and sharing to bring about positive change by involving numerous sportspeople, artists and humanists to promote sport, education, health, the fight against the HIV/AIDS and sustainable development.

This project would not have been possible without the support of generous fund donors and the support of many international athletes. They are role-models, heroes and sources of inspiration for youth the world over and they work to make sport a tool for dialogue and social cohesion. »

About the Caravan for Peace :

Founded in 2017 by Marlene Harnois, in partnership with Peace and Sport, the Didier Drogba Foundation and Golden Blocks sponsored by Ladji Doucouré, the Caravan for Peace is an event for social cohesion with the aim of uniting Champions to participate in humanitarian action for development and peace. This edition is the first of many, planned to take place each year.