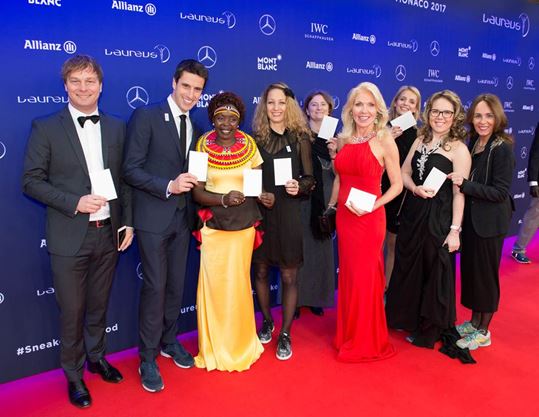 This week the 17th edition of the Laureus World Sport Awards, an annual event that rewards the best athletes of the past year, took place in Monaco. In attendance of athletes from different backgrounds, this gala is an opportunity to exchange about their performance but also to share the values ​​of sport.

Patron of the first edition of the Laureus World Sport Awards, Nelson Mandela gave a memorable speech in 2000. (credits Laureus)

From Peace and Sport side, Champion for Peace Tegla Loroupe received the Laureus Award for Sporting Inspiration on behalf of the whole Olympic Refugee Team. During the Rio Olympic Games, Tegla was the head of the delegation of the first Olympic Refugee Team, raising awareness on this major global crisis.

During this gala, the Champions for Peace who attended, like Tony Estanguet and Tegla Loroupe, were also able to sensitize people at the International Day of Sport for Development and Peace, by taking a #WhiteCard picture on the red carpet.

We invite you to join this movement from March 27th, for the launch of our global digital campaign, supported by numerous International Federations, NGOs and our Champions for Peace.