THE CARAVAN FOR PEACE COMES TO AN END AFTER 3 DAYS OF SHARING, SPORT AND EMOTION

Led by Taekwondo Olympic Champion and Champion for Peace, Marlene Harnois, the Caravan for Peace traveled across Senegal to meet children, families and associations to promote the values ​​of solidarity through sport, to inspire youth and provide support to areas affected by precariousness.

Organized in a spirit of friendship and sharing, in partnership with Peace and Sport, the organization placed under the High Patronage of HSH Prince Albert II of Monaco, the Caravan for Peace brought together the greatest Champions such as:

The representatives of the Senegalese Government, the Senegalese National Olympic Committee, the national sports federations, and the partners were gathered around an Opening Conference in Dakar on the theme “Sport, education and culture for development and peace”, the first day of the Caravan ended with a meeting with the Director of the National Council of Fight against AIDS and the visit to orphans in the nursery of M’Bour. 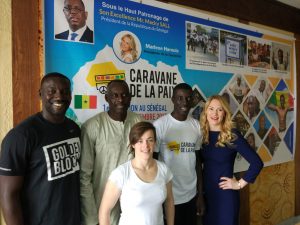 The program included sport activities such as:

– An introduction to Taekwondo by the Champions for Peace

– A demonstration of Taekwondo by the Senegalese national team

– A collective photo gathering the hundreds of villagers’ present showing a #Whitecard, symbol of peace through sport 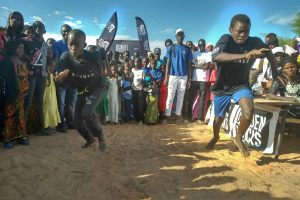 But also social actions that will have a long-term impact on the village:

– Installation of a drinking water fountain, filtering up to 24,000 liters of water per day 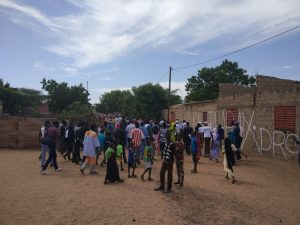 The third and final day of the Caravan began with a visit to the island of Goree, symbol of the memory of slavery and one of the first places to be added on the list of world heritage managed by the United Nations Educational, Scientific and Cultural Organization.

The #WhiteCard, a symbol of Peace through Sport, was made on the island. 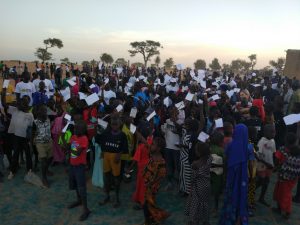 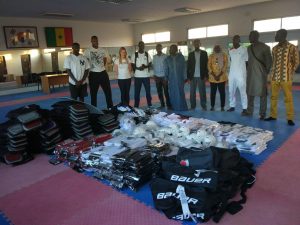 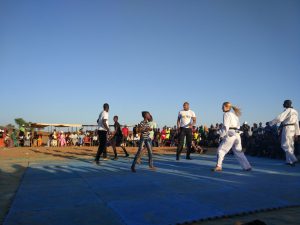 For Marlène Harnois: “During these 3 days of emotions, the Caravan for Peace conveyed a spirit of friendship and sharing and I hope it brought joy to the people we met. I would like to thank all the athletes, partners and donors who supported us for this first edition in Senegal and I look forward to seeing you next year for a new edition of the Caravan for Peace.”