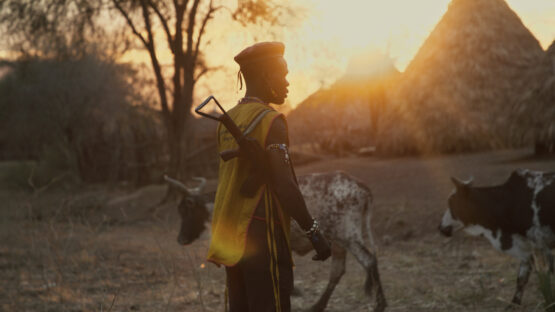 Since 2014, in partnership with the Sportel Awards, Peace and Sport rewards directors who are tackling themes to demonstrate that sport can move barriers and norms in society.

This year, the Jury, made up of Champions for Peace committed alongside Peace and Sport, has chosen to reward Christophe Castagne and Thomas Sametin for their documentary «For the Sake of Peace» (2022), produced by the American actor Forest Whitaker through his NGO, Whitaker Peace and Development Initiative (WPDI), with Significant Production and R2.

South Sudan is the youngest state in the world, in civil war, with over 350,000 people killed since its creation in 2011. Yet through this darkness and repeated conﬂicts, a hope glimmers: the determination of young women and men who refuse to give up on Peace. Gatjang, a referee in a camp for displaced people in Juba, uses sports to impart a culture of peace to children and youth from tribes opposed by stubborn hostility. Nandege, a young mother, manages to emerge against all odds as a talented mediator in the settlement of a deadly conﬂict that has pitted communities in the Kidepo Valley against each other for generations. Through their stories, we become aware of the paths available to our humanity and their resonance across horizons and borders.

“Films have the ability to convey the emotions and values transmitted by sport. The Prize winner, “For the Sake of Peace”, highlights brilliantly how sport, and especially football, acts as a universal language and can become a powerful vector of unity and acceptance within and between communities. All our congratulations to the directors of the movie!”

Christophe Castagne, director of “For the Sake of Peace”,declared:

“Forest Whitaker’s request was to showcase South Sudanese people fighting for peace on a daily basis. In For the Sake of Peace, Thomas Sametin and I portray two ‘ordinary heroes’ who are essential to the film’s success: Gatjang as a teacher of the values of respect and camaraderie inherent in sport, and Nandege as a spokesperson for the essential wisdom that promotes peace. Shot in the second most violent country in the world, it took us six years to make this film, and it allowed us to put two ways of making peace in parallel. In particular, it highlights the way leisure can be a medium to educate people to love the opponents and spread tolerance. By getting involved in the organisation of football matches, Gatjang tries to bring together the best players, regardless of their ethnicity and background, and to take them as far as possible. If these men decide to forget their differences and give their best, together they could create the first national football team of South Sudan. Football gives these young people hope for a better world. That is the incredible power of football. South Sudan is one of the youngest and most violent countries in the world and it has gone completely under the media radar. However, this documentary bets on virtue and light, on peace. If this country comes out of it, and I hope it does because it is a wonderful country, it will be thanks to its youth!

Last year, the documentary « Luchadoras » by Paola Calvo and Patrick Jasim was rewarded with the Peace and Sprot Documentary Prize. The documentary portrays courageous female wrestlers of Ciudad Juárez, a city known for its high murder rate against women. Lady Candy, Baby Star and Mini Sirenita fight in the ring and in their daily lives to redefine the image of what it means to be a woman in Mexico.

Peace and Sport is a neutral and independent organization based in the Principality of Monaco founded in 2007 by Joël Bouzou, 1987 Modern Pentathlon World Champion, Olympic medalist and President of the World Olympians Association. Under the High Patronage of H.S.H. Prince Albert II of Monaco, Peace and Sport acts concretely to demonstrate the unifying, educational and social impact of sport through sports diplomacy initiatives and field programs with the support of the Champions for Peace.

From November 30 to December 1, the 13th edition of the Peace and Sport International Forum will offer a unique opportunity to place peace-through-sport at the heart of the debates and generate concrete answers to build more inclusive and peaceful societies.