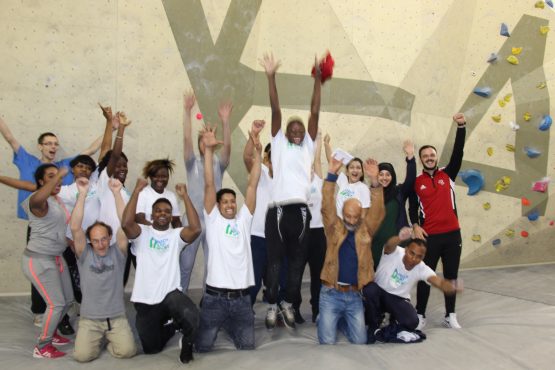 This morning they were 15 waiting to climb into the minibus, refreshed and eager to take part in the sports day. Three weeks earlier, there were 17 participants at the preparatory meeting. The good news is that the 2 absentees have started a trial period in a company. Kevin, the trainer, confided that he’d never seen such a high turnout.

Our vehicles made their way through the traffic and dropped us off in the Foret de Fontainebleau, where a we found a room fully equipped with climbing equipment such as ‘boulders’ and ‘tracks’. Everyone got kitted out and Christophe, the educator, explained safety procedures before fixing the rules of the individual challenge that each youngster had to tackle on their own. 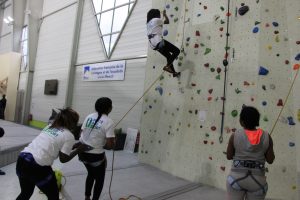 Everyone brightened up in this fabulous location, looking forward to their exploits. Once again we saw the interest generated by the wall fitted with boulders by which you climb to the top. The girls were the first to raise an arm in victory when they reached the summit 15-20 metres above the ground. Reassured, everyone persevered in their determination to ‘get to the top’ according to their own capabilities. Each had different motivations and we applauded those who were scared to climb high but came to the first boulder “for the photo”. During the break Christophe agreed to do a demonstration by climbing an overhang which earned him a round of applause. 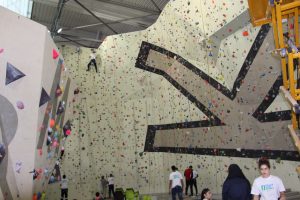 After the lunch break, it was back to boxing supervised by Geoffrey. After a serious warm-up session, which everyone took part in, they put on gloves to carry out exercises, for the most part in groups of 2 or 3. 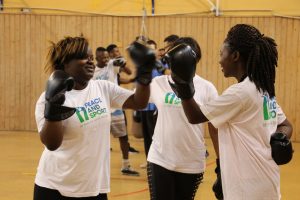 The spirit of solidarity was once again present. The movements taught were memorized and then put together in increasingly rapid sequences. Nobody stopped short and at the end of this two-hour session all participants were tired, but their satisfaction was evident. 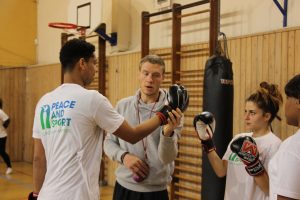 Everyone was smiling, a long way away from the closed and resigned faces of the first day. As attentive spectators, we shared this good time in silence, with a hint of pride. The partnership is a winner: the Mission Employment-Insertion Melun put their trust in us and we have successfully developed our concept. These young men and women understood the concept and we’ve given them self confidence in their abilities.

WE HAVE HELPED THEM AND THEY DESERVE IT.  PLEASE GIVE US THE MEANS TO CONTINUE.