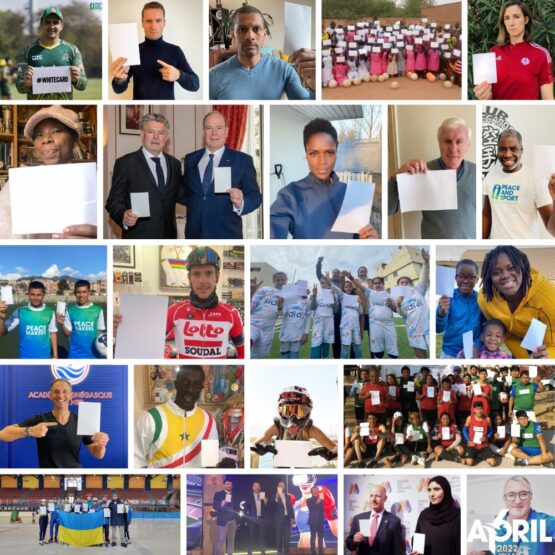 “Sport is an answer for peace. Raise your WhiteCard”: Peace and Sport celebrates the International Day of Sport for Development and Peace

Through the #WhiteCard 2022 digital campaign, Peace and Sport wishes to reaffirm that sport is a great tool for creating and maintaining links beyond all differences and that it contributes to a more united world.

This year, the mobilization was launched with a statement for peace following the invasion of Ukraine by Russia, and it staged the response of the sporting world.*

Until April 12, the Champions for Peace who signed the statement, but also athletes from all over the world as well as civil society organizations and political figures, will brandish their WhiteCard, this symbol of peace.

President and Founder of Peace and Sport Joël Bouzou,said:

“At a time when risks of division await us, I invite sports and peace actors, political leaders and representatives of the private sector, to raise their #WhiteCard as a sign of support to all peace efforts. More than ever, it is necessary to recall the contribution of sport to conflict prevention, conflict resolution and in post-conflict processes. »

Every year, the International Day of Sport for Development and Peace is celebrated with numerous initiatives promoting the positive role of sport in achieving the Sustainable Development Goals.

From the United Arab Emirates to Colombia, via Mexico, Togo, Burkina Faso, India, Mali, Poland, Portugal, France, Jordan and Morocco, there are many stakeholders on the ground who have already mobilized ahead of the April6 celebration.

Placed under the High Patronage of H.S.H. Prince Albert II of Monaco and based in the Principality, Peace and Sport is an international, neutral and independent organization which promotes the consolidation of peace through the power of sport. It was created in 2007 by Joël Bouzou, Olympic medalist, Modern pentathlon World Champion, and President of the World Olympians Association.

About the International Day of Sport for Development and Peace

On August 23, 2013, the United Nations General Assembly, with the support of the International Olympic Committee, declared April 6 as the International Day of Sport in the Service of Development and Peace, at the United Nations Headquarters in New York. This decision was a historic step in recognizing the transformative power of sport and its limitless potential to contribute to positive social change. The following year, Peace and Sport launched the #WhiteCard digital campaign and the www.april6.org platform to create a global movement for the International Day of Sport for Development and Peace and to highlight the positive power of sport.

* On March 4, following the invasion in Ukraine, Peace and Sport published a column signed by more than 700 people, including 49 Champions for Peace and 18 Olympic Champions, which invited sports stakeholders to demand peace and to contribute to its construction. The Vice-President of Peace and Sport Didier Drogba, Christian Karembeu, Alexandra Kosteniuk, Oleksiy Klyamar, Quentin Fillon-Maillet, Tony Estanguet, Yohan Blake, Cléopâtre Darleux and Sarah Ourahmoune were among the signatories.

Read the statement “Sport as a force for peace”