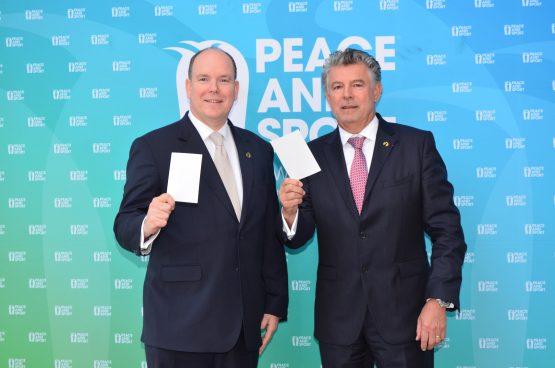 Peace and Sport, the politically-neutral organisation dedicated to promoting the peace through sport movement, has hailed the success of its annual #WhiteCard campaign, which this year has reached more than 43 million people worldwide.

The campaign, anchored around April6, the United Nations’ International Day of Sport for Development and Peace (IDSDP), asks athletes, International Federations (IFs) and everyone involved in sport to pose for pictures with white cards, before sharing them on social media. As well as raising awareness, the campaign also encourages people across the globe to set up sport-based peace projects to be recorded and shared on Peace and Sport’s own april6.org platform.

This year has seen more than 630 of these projects set up across 150 nations already, covering all corners of the globe. Olympic pole vaulter Yelena Isinbayeva engaged children from a social rehabilitation centre in Volgograd, Russia in a number of sporting activities, while French Olympic taekwondo medalist and former European champion Marlene Harnois travelled to Mali to organize a concert, martial arts exhibition and debate for children. Other high-profile athletes who set up projects were Sergey Bubka, Aya Medany and Palestinian female footballer Honey Thaljieh.

Paris Mayor Anne Hidalgo and sport business executive Casey Wasserman both took part in the campaign as they go head to head as ambassadors of Paris 2024 and LA 2024 respectively in the race for the 2024 Olympic and Paralympic Games, while US Olympic swimming prodigy Katie Ledecky and Tennis superstar Milos Raonic headed up a long list of top athletes who posed for photos.

On top of this, Peace and Sport, alongside the International Ice Hockey Federation (IIHF), brought together athletes from North and South Korea, two countries whose troubles have been well documented, for a #WhiteCard image following their game at the IIHF Women’s World Championship, held in PyeongChang. The picture was a significant moment for Korean relations, and served as proof of the impact that sport can have on global peace efforts.

Other events conducted by Peace and Sport to mark IDSDP included a press conference in the UN Headquarters in New York, the mobilization of students in Monaco through the Ministry of National Education, Youth and Sport (DENJS) and the Princess Charlene Foundation, and a number of thought provoking discussions led by the organisation at major conferences in Colombia and Guatemala.

“This year, our 10th anniversary, has been a very important one for Peace and Sport. We are committed to working harder every year to help promote the importance of sport in building a more peaceful world, and this year’s #WhiteCard campaign has been no different. We have reached a phenomenal amount of people from all walks of life, and there can be no question that the #WhiteCard campaign has touched the lives of people in desperate need of peace.

“We now want to build upon this success and create real change. We’ve been present across the world spreading the word of our #WhiteCard campaign, and the photograph taken during the Women’s Hockey Championship is proof of the good work our campaign does. As we look ahead, we hope that we can maintain this momentum and ensure even more success for the peace through sport movement.”

“I grew up in a war zone. Sport gave me a window to the outside world. It helped me to retain hope for the future. I realised that I wasn’t alone and that there were many of us looking for peace. The #WhiteCard campaign is important for spreading this word, and I hope that this year we can touch the lives of many just like me.”