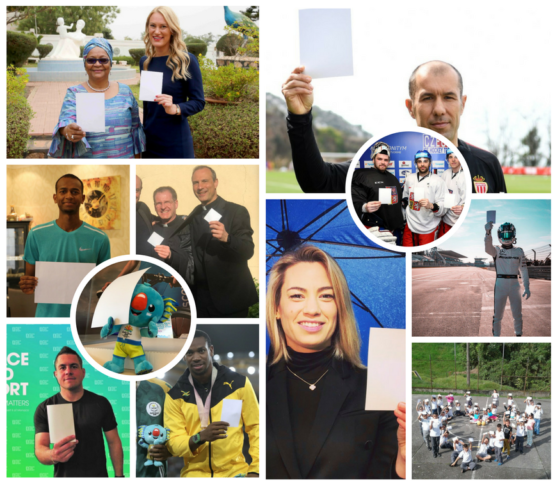 The 2018 online #WhiteCard campaign reached new heights on the International Day of Sport for Development and Peace, April6, with more than 90 million people reached on social media* since it was launched on 20 March.

This year, the #WhiteCard worldwide digital campaign, created by Peace and Sport to promote the positive and constructive values of sportn attracted a vast and varied following on social networks. The sports movement has largely mobilized around the #WhiteCard with the National Olympic Committees of Venezuela, Estonia and India, the Union Cycliste Internationale, the International Modern Pentathlon Union and the World Taekwondo.

The Champions for Peace raised awareness among their audience raising a #WhiteCard on social media like Didier Drogba, or on television sets like Tatiana Golovin. Thus, new peace-through-sport actors joined the movement such as the captain of the French Rugby team Guilhem Guirado. Jamaican athlete Yohan Blake raised a #WhiteCard on the podium of Gold Coast 2018 Commonwealth Games.

Heads of State brought the campaign to the institutions and civil society of their country. The Colombian government, under the leadership of H.E. President of the Republic Mr. Juan Manuel Santos, actively contributed to the campaign, inviting in the movement many sports clubs. H.E. President of the Republic of Macedonia Mr. Gjorge Ivanov, H.E. President of Senegal Mr. Macky Sall and the First Lady of Mali Mrs. Aminata Keita also brought the message of peace through sport on this symbolic day. The French, Ukrainian and Malian sports ministers raised their #WhiteCard too.

Sporting and cultural events around the world

For this 5th International Day of Sport for Development and Peace, the international community, motivated by Peace and Sport, organized more than 750 inspiring events registered on www.april6.org.

Numerous international sports federations, athletes, Champions for Peace, institutions, schools, and associations got into action in the four corners of the world to celebrate this special day and convey the message of peace through sport.

A Sport for Development and Peace Forum was hosted by the National Olympic Committee, in partnership with Peace and Sport in Guatemala. Peace and Sport organized a number of sports and cultural activities in the Za’atari Syrian refugee camp in Jordan to celebrate the power of sport for social good in partnership with the United Nation High Commissioner for Refugees (UNHCR). 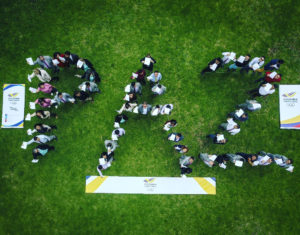 More than 30 Peace and Sport ambassadors called ‘Champions for Peace’ took part in events organized for April6. Women’s world chess grand master Alexandra Kosteniuk from Russia led a chess tournament organised by St. Lawrence High School of Kolkata in collaboration with St. Lawrence Old Boys’ Association, Jesuit schools around the world, and other schools in Kolkata. In Japan, Charmaine Crooks, 5-time Olympian and flag-bearer for the Canadian delegation, participated in the 2018 FISE World Series and joined the Hiroshima Peace Memorial.

In Monaco, rally driver Adrien Maré spoke to 400 students at a conference during the “Rally Princess Charlene” organized by the Department of Education, Youth and Sport (DENJS) in collaboration with Peace and Sport, the Princess Charlene of Monaco Foundation and APEM (Parent-Teacher Association of Monaco).

Joël Bouzou, President and Founder of Peace and Sport made this statement at the Za’atari refugee camp in Jordan:

“I am very honoured to celebrate the International day of Sport for Development and Peace here in the camp of Za’atari, with children, families, associations and sports federations who work every day to build a better life using the positive values of sport. I am particularly moved by the knowledge that hundreds of sports and cultural initiatives are teaching the values of peace and sharing thanks to sport and through the #WhiteCard symbol simultaneously in different places around the world.”

Initiated by the United Nations General Assembly in 2013 with the support of the International Olympic Committee (IOC), the International Day of Sport for Development and Peace has become a fixture in the movement’s global peace-through-sport calendar, and especially in Peace and Sport’s agenda. The first four editions saw 2,110 projects and events from 180 countries on all 5 continents registered on the www.april6.org platform.