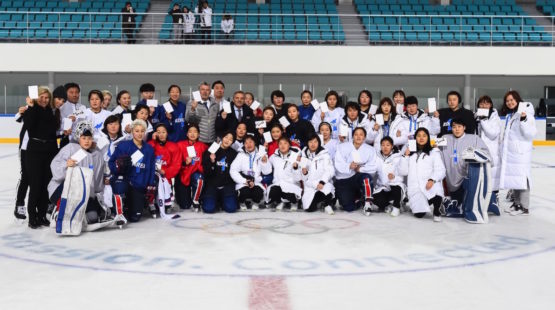 Peace and Sport welcomes the changes to the Olympic oath and the evolution of article 50.2 of the Olympic Charter

Historically, the Olympic Games and the Olympic Village have fostered intercultural meetings, dialogue and peace. The Games make it possible to meet athletes from other cultures and to forge relationships on an equal footing. During the Games, equality becomes the dominating principle; it nourishes dialogue and promotes equal opportunities. The rule of fairness applies to everyone and surpasses distinctions between races, nationalities, religions and gender.

Sport events are a momentum for a better world through the universality of sport. Sport unites us under a banner without borders that embraces differences and each sport event, especially the Olympic Games, acts as a brick to construct an edifice which becomes the guarantor of sustainable peace.

With 1 day to go before the opening ceremony of the Olympic Games, Peace and Sport welcomes the changes to the Olympic oath, which highlights the importance of solidarity, inclusion, non-discrimination and equality, and the evolution of article 50.2 of the Olympic Charter, which acknowledges even further the key advocacy role of athletes.

Athletes will now be able to convey worldwide messages of solidarity and inclusion during press conferences, on social networks and at team meetings during the Olympic Games. However, it will be prohibited to speak out on the medal stand during the opening and closing ceremonies, in the Olympic Village and on the field of play during competition.

According to Joël Bouzou, President and Founder of Peace and Sport, it is essential for athletes to be able to speak out before, during and after the Olympic Games:

“As President and Founder of Peace and Sport and Olympic Medalist, I believe that the evolution of the article 50.2 of the Olympic Charter marks an important step to amplify the voice of athletes as role models who can help achieve a fairer future. Beyond the performance during sporting events, athletes can carry powerful messages of solidarity, unity and dialogue, defend social themes and participate in the reflection around global issues.”

The Games provide a tremendous opportunity to reaffirm how sport can advance dialogue, respect and peace. During and after the Games, Peace and Sport will keep supporting any initiative fostering peace and continue to convey messages of solidarity and inclusion through sport.