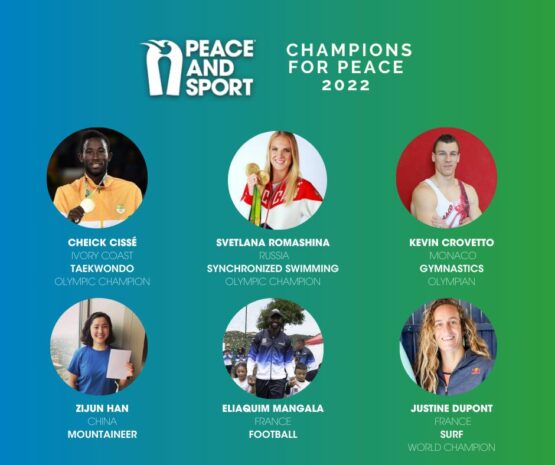 Peace and Sport, the international Monaco-based organisation dedicated to the peace-through-sport movement, has today unveiled a host of 6 new Champions for Peace who will help to spread the organisation’s vision across the world.

Peace and Sport’s new Champions for Peace are:

“The Champions for Peace have become a pillar of the Organisation. These 6 new athletes join a committed group of top-level sportspersons who, through their image and influence, serve peace through the power of sport. As Peace and Sport celebrates its 15-year anniversary, it is very special to be able to add such talents to our ambassador’s base.”

« I am very honoured to become the 2nd Chinese Champion for Peace after Guo Chuan, who I knew in person and who has always been an inspiration to me. I am preparing for my solo expedition across Antarctica to the South Pole in November 2024 and will start my training in Norway soon. I want to raise the WhiteCard for Peace and Sport when I reach the South Pole. I want to inspire more ordinary people like me to do impossible things by dreaming big and promoting peace through sport. »

“The greatest and most beautiful victories are always collective, so it is important to share with youth and promote the positive values of sport, to inspire future generations and move forward together, in peace, towards development. »

“I strongly believe that peace can only be achieved through the education of young people and the transmission of sport values. »

“It is an honor for me to join this family of outstanding Champions who are uniting their effective efforts to successfully achieve the noble goals and objectives of our organisation. This is our mission we have to live up to”.

« Peace, sharing and love are essential values that we can find in sport. It is an honor to represent these values and to be able to share them with a group of incredible athletes within the Peace and Sport’s organisation. »

“Sport is a symbol of peace and equality. These are the values that have followed me throughout my career. I have had the chance to meet people from all over the world, with whom I have been able to share, discover and unite. Sport is universal and intercultural; let us give it a place at the highest level to federate and create a space where peace and cohesion reign. I am very happy to join the Champions for Peace Club and I thank Peace and Sport for its daily commitment.”

All of the new Champions have demonstrated their belief in the power of sport for change throughout their career, engaging in numerous community-led projects and using their privileged position as athletes to inspire future generations.

Together, the new Champions will bring energy and enthusiasm to the cause and will help Peace and Sport to maximise the impact of sport-based initiatives in the field. They will also be among the personalities participating in the Peace and Sport International Forum, which will take place on November 30 and December 1 in the Principality of Monaco.

Read more about the Peace and Sport International Forum

Peace and Sport is an international organization under the High Patronage of H.S.H. Prince Albert II of Monaco, and is aware that athletes are also citizens who can play a role in society. In 2009, Peace and Sport created the Champions for Peace Club, a group of more than 120 athletes. Heroes, role models and sources of inspiration for young people around the world, they dedicate part of their time, their fame, and their experience to projects using sport to address social, economic, and educational issues. On the occasion of the International Day of Youth, on August 12, Peace and Sport created the Junior Champions for Peace Club, a group representing six young dynamic athletes between 12 and 18 years old, from different sports and nationalities. Alongside Peace and Sport, these rising high-level athletes will lead innovative initiatives and promote peace values through sport.

Read more about our Champions for Peace