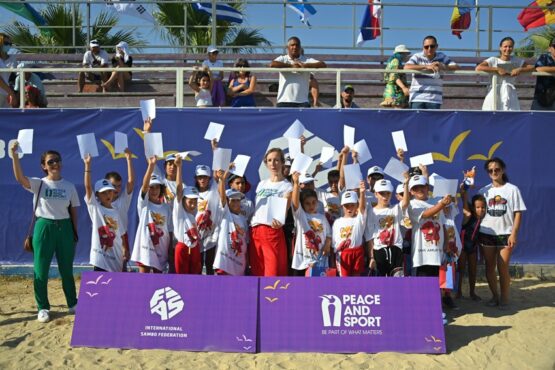 Peace and Sport teams up with the International Sambo Federation for the first World Beach Sambo Championships!

Peace and Sport and the International Sambo Federation (FIAS) collaborated on a charity partnership in the framework of the first World Beach Sambo Championships 2021 in Larnaca (Cyprus), on 28-29 August 2021.

This charity initiative was a way to highlight that sport goes beyond performances, and it focused on positive values that are an essential part of Sambo: respect, friendship and inclusion. The first World Beach Sambo Championships were also a chance to bring athletes and officials from different countries together after challenging times and to celebrate diversity, equality and cooperation.

On the eve of the start of the competition, Sambo World Champion and Champion for Peace Laure Fournier held a master class for 20 young Cypriots from different backgrounds:

“During the lesson girls fought with boys, kids with adults, and this once again demonstrated the full power of sport, its ability to remove any obstacles that exist between people. I hope that the organization of these masterclasses will become a good tradition. We have already discussed this proposal at the meeting of the FIAS Commission on Athletes’ Affairs and concluded that we will strive to hold them at major international tournaments”.

During the Awarding ceremony, athletes raised their #WhiteCard on the podium as a gesture of peace and inclusion. To close the event, Laure Fournier gave a speech highlighting the 10-year fruitful cooperation between Peace and Sport and the International Sambo Federation. Over the years, the Sambo community has significantly contributed to raising awareness about sport’s power for dialogue and inclusion by massively participating in the celebration of April6, the International Day of Sport for Development and Peace. FIAS notably played an essential role in the success of the #WhiteCard campaign which reached 170 million people worldwide.