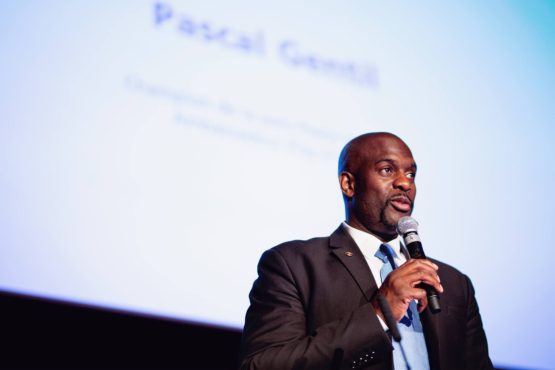 250 people attended to the Play 4 Peace charity gala -the association won the Peace and Sport Awards in 2017- in Brussels on Thursday 4th October. At the Hotel Plaza, the evening was under the high patronage of His Majesty, King Philippe of Belgium. During the gala, an auction and a raffle were organized, in order to raise money for Play 4 Peace numerous projects, like the Peace 4 Peace House, a living space for members and beneficiaries of the association.

During the gala, Peace and Sport supported Play 4 Peace to promote tolerance and social inclusion through sport. Champion for Peace Pascal Gentil said a few words on behalf of Peace and Sport: « here, we are all convinced that sport is a universal language. Everybody understands and accepts the same game rules. This is why sport is an extraordinary tool to foster intercommunity dialogue, social cohesion and durable peace. »

In 2017, Play 4 Peace received the Peace and Sport Award for April 6 initiative of the year, awarded by H. S. H. Prince Albert II of Monaco (the April 6 initiative rewards best peace through sport actions). A useful reminder from our champion: 2019 edition of April 6 and #WhiteCard campaign is approaching.

The association raised over 60 000 euros on Thursday night, with prizes sport lovers had to fall in love for, such as signed jersey of the local soccer team Red Devils or soccer star Cristiano Ronaldo, a World Cup replica, golf lessons…