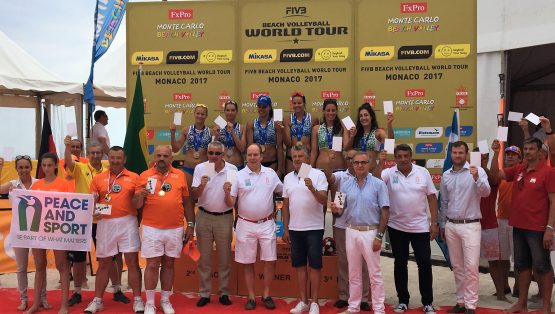 Peace and Sport, the politically-neutral organisation aimed at promoting sport as a tool for peace, has joined forces with the Fédération Monégasque de Volleyball and the International Volleyball Federation (FIVB), to organize a #WhiteCard activation at the FxPro Monte-Carlo Beach Volley 2017, in Monaco.

A #WhiteCard picture was taken on June 18th with the winning teams and a number of athletes in the presence of His Serene Highness the Prince Albert II of Monaco and Mr Joël Bouzou, Peace and Sport President and Founder. The FxPRO Monte-Carlo Beach volley is the only Monegasque and French competition to be inscribed in the FIVB’s World Tour 2017.

Joel Bouzou, said: “Holding a white card like a referee on a sports field is a symbolic action for raising awareness about the positive impact that sport makes at local and international level in bringing people together, no matter their social, political or religious background.”

So far, the 2017 #WhiteCard campaign, which is anchored around the UN’s International Day of Sport for Development and Peace (IDSDP) on April 6, has reached more than 43 million people across social media since the turn of the year. Peace and Sport particularly encourages international and national sporting federations to organize podium #WhiteCard all year round during international competitions.