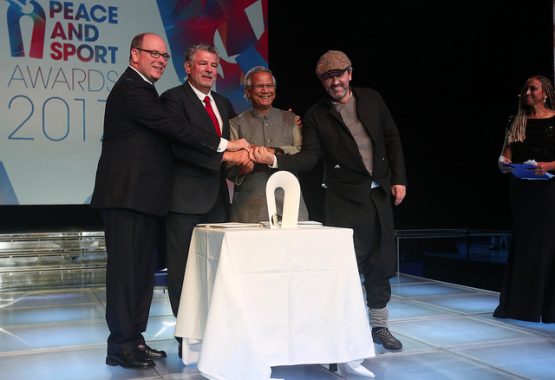 Peace and Sport has today unveiled two major partnerships, with Professor Muhammad Yunus and the Yunus Centre’s functional arm, the Grameen Creative Lab and the Jordanian National Olympic Committee (JOC), as it kicked off its tenth anniversary edition of the Peace and Sport International Forum.

Peace and Sport President Joel Bouzou began the landmark Forum by launching a partnership with the Yunus Centre and the Grameen Creative Lab that will see the the organisations collaborate on the Principality of Monaco’s first ever Social Business Fund. Peace and Sport and the Yunus Centre will seek to reach the most vulnerable people around the world by stimulating both entrepreneurial activity and the practice of sport as a tool for peace. The Social Business Fund will gather the investments of people willing to contribute to the peace-through-sport movement, and reinvest them in social enterprises.

The Yunus Centre, founded by Professor Yunus, is based upon the principles of social business and microcredit, which encourage people to contribute money to a fund which is then used to offer small business loans to those who are too poor for a standard bank loan.

The MoU, which was signed by President Bouzou and the JOC Secretary General, will see the two collaborate on the Live Together Programme, which helps to bring sport and activity to the Zaatari refugee camp in Jordan.

Alongside UNHCR, a host of International Federations, and Peace and Sport, the Live Together programme will inspire hope throughout the refugee camp and show how sport can be a real tool for change.

“These are very important partnerships for Peace and Sport, and a very special way for us to kick off the 2017 Peace and Sport International Forum. We are committed to enacting real change around the world, and we feel that sport has the power to do this. Through our new Social Business Fund we can help people around the world help themselves, and raise awareness of the importance of social initiatives in business. The work Professor Yunus has done around the world has been incredibly influential, and we are delighted to be contributing to this common goal.

Additionally, the National Olympic Committee of Jordan offers us a real opportunity to help use the Olympic sports to change the world for the better, and I am excited about what lies ahead for this partnership.

It is also an honour for me to officially open the 2017 Peace and Sport International Forum. These three days will bring together some of the brightest minds in the peace-through-sport movement, and it will be enlightening to see how ideas develop and grow as conversations take place.”

Drogba, who will speak again alongside Noble Peace Prize winner Muhammad Yunus on day two of the Forum, introduced the audience to the work he has done through his Foundation, which has been responsible for easing civil tensions in the Ivory Coast, and how he hopes to link it to the Peace and Sport brand. He also took the opportunity to stress the importance of sport in the global peace movement, and the role of athlete ambassadors in using their platform to drive change.

Earlier in the day, more than 40 high-profile Champions for Peace representing 23 countries and 20 different sports joined together with Joël Bouzou, to discuss the numerous actions carried out over the past year and talk about the numerous projects they are involved in under the umbrella of Peace and Sport.

Discussing his inclusion as a Champion for Peace, Didier Drogba added:

“Experience has taught me that I can use my voice to bring about change and that I can be an example for others. I take my role of ambassador very seriously and I hope that it will give me new opportunities to speak about problems that affect my country and my continent, which are so close to my heart.”

Pictures of the press conference are available here: https://flic.kr/s/aHskpvzYpF