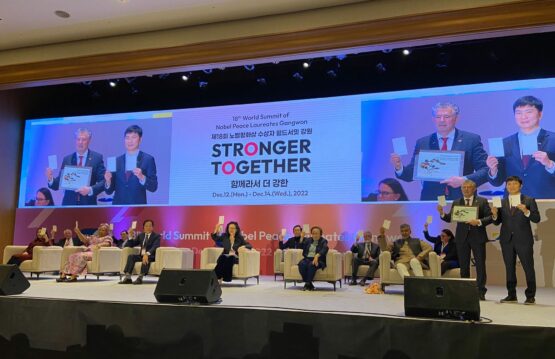 Every year, Nobel Peace Laureates gather to discuss about peace and conflict resolution and to honour men or women of peace who have made an outstanding contribution to international social justice with the Peace Summit Award.

This year, on December 14, the Committee of the 18th World Summit of Nobel Peace Laureates decided to reward Peace and Sport with the Peace Summit Award, a significant recognition of the peace-through-sport initiatives deployed by Peace and Sport over the past 15 years, in areas of conflict, disaster or great poverty. This distinction also acknowledges the contribution of customised sport-based initiatives to peaceful coexistence.

President and Founder of Peace and Sport Joël Bouzou, declared :

« It is an immense honor to receive this 2022 Peace Summit Award. I would like to thank the World Summit of Nobel Peace Laureates Committee for the great recognition it has given to the approach we have chosen 15 years ago: contributing to a more inclusive and peaceful world through Sport. Faced with the resurgence of geopolitical tensions, the need for peace has never been greater; a “culture of peace” has never been so vital. And sport has never had such an important place in it. We have change paradigm : from sport development to teaching peace through sport. I would also like to thank H.S.H. Prince Albert II of Monaco, fervent defender of the neutrality, equity and universality of sport, for His support, the Champions of Peace who are committed to us, our partners, and all the stakeholders in peace through sport who have made these ambitious ideals come alive in the field. »

« For the past 15 years, Peace and Sport has built a growing international community of peace through sport change makers worldwide, composed of political decision-makers, peace leaders, civil societies, NGOs, athletes and sport institutions, with great achievements. From now on, the Organisation will focus on giving a voice to the program leaders, to feed the decision-makers on the reality of the field. It is time to leverage on a global scale high-impact concrete peace through sport field programs. Through this 2022 Peace Summit Award, on the occasion of the 15th anniversary of Peace and Sport, we acknowledge this Organisation and peace through stakeholders worldwide. May the peace through sport community thrive and pursue these peace-building efforts. »

“Stronger Together”, the 18th World Summit of Nobel Peace Laureates in Pyeongchang, focused on building bridges rather than walls,  finding practical ways to put an end to conflict, and using mediation and common goals to depolarise our world. It draw special attention to families separated by the ongoing Korean war and it handled the most pressing global issues on defense, climate change and equality.

Peace and Sport is a neutral and independent organization based in Monaco since its creation in 2007 by Joël Bouzou, Olympic medallist and President of the World Olympians Association. Under the High Patronage of H.S.H. Prince Albert II of Monaco, Peace and Sport has been promoting the building of peaceful, inclusive, and equitable communities through the power of sport and the values it conveys.

Using a bottom-up approach based on its experience and the reality of actors on the ground, Peace and Sport proposes solutions adapted to the challenges encountered at the community level to build high-impact programs that use sport to build a culture of peace.

As a partner of leading international organizations and sports institutions, Peace and Sport carries out its actions with the support of the Champions for Peace Club, which brings together more than 115 high-level athletes. Based on its expertise and the feedback received from field programs leaders worldwide over the past several years, Peace and Sport calls on international decision-makers to use sport as a tool for transmitting the values of peace.

About the World Summit of Nobel Peace Laureates

The World Summit of Nobel Peace Laureates was created by late Nobel Peace Laureate, Mikhail Gorbachev in 1999 with clear objectives to contribute to world peace through Nobel Peace Prize winners. It has been, for 20+ years, a meeting point for social, business and political leaders, as well as members of civil society who wish to participate in the peace-building process. Today it is one of the most relevant and renowned events related to the construction of peace and the search for tools to end warfare, foster disarmament and promote world reconciliation. The first World Summit of Nobel Peace Laureates took place in Rome, Italy in 1999. The Summit has been hosted by landmark cities for world peace, such as Rome, Paris, Berlin, Hiroshima, Warsaw, Chicago, Bogota, Merida and Barcelona.