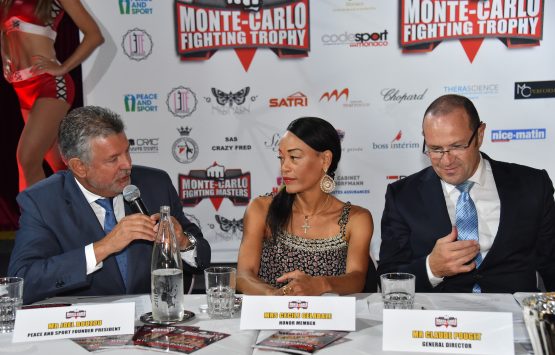 Peace and Sport is partner to the Monte-Carlo Fighting Trophy

For the third year Peace and Sport, the politically-neutral organisation aimed at promoting sport as a tool for peace, is partnering with the Fédération Monégasque de Kickboxing for the Monte-Carlo Fighting Trophy in Monaco on the 30th of June.

In 2016, with the signature of a Memorandum of Understanding between Peace and Sport and the Fédération Monégasque de Kickboxing, 8 000 euros were raised during the Monte-Carlo Fighting Masters to support the Friendship Games, an annual cross-border sport gathering promoting brotherhood between nations in the African Great Lakes region. This year, Peace and Sport renews its message promoting the use of sport as a tool for peace and will continue its partnership for a 2018 fundraising campaign with the Fédération Monégasque de Kickboxing.

During the Press conference, Joel Bouzou, Peace and Sport President and Founder declared: “Sport, especially fighting sports demand discipline, respect of rules and of opponents. It requires determination and ability to struggle. For 10 years now, our struggle is a struggle for peace. Peace and sport gathers international federations, champions and sporting actors to be involved in sport and social grassroots projects in conflicting regions.”