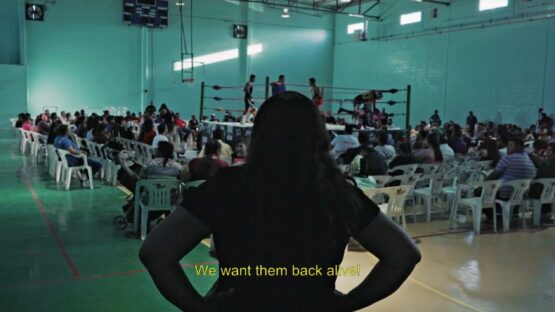 Since 2014, in partnership with the Sportel Awards, Peace and Sport rewards directors who are tackling themes to demonstrate that sport can move barriers and norms in society.

The documentary « Luchadoras » portrays courageous female wrestlers of Ciudad Juárez, a city known for its high murder rate against women. Lady Candy, Baby Star and Mini Sirenita fight in the ring and in their daily lives to redefine the image of what it means to be a woman in Mexico. Despite living in fear, these women empower themselves. In the ring, they become loved and respected.

“Captains of Zaatari”, by Ali El Arabi, was also competing for the Prize. The movie depicts the life of Syrian teenagers Mahmoud and Fawzi, two friends living in Zaatari refugee camp in Jordan. They dream of becoming professional soccer players while facing the difficult reality of their lives.

“Films have the ability to convey the emotions and values transmitted by sport. For this 2021 edition of the Peace and Sport Documentary Prize, we have received a lot of inspiring applications that demonstrate that sport can be used to effectively tackle social issues. The Prize winner, “Luchadoras”, highlights brilliantly how sport, and especially wrestling, can become a powerful liberation tool. All our congratulations to the directors of the movie! ”

Last year, « Into the Storm », by Adam Brown, was rewarded with the Peace and Sport Documentary Prize. Filmed over 5 years, the movie follows the unlikely dream of a young indigenous surfer from one of the toughest barrios in Latin America as he struggles to escape the deprivations of his background and become a professional athlete.