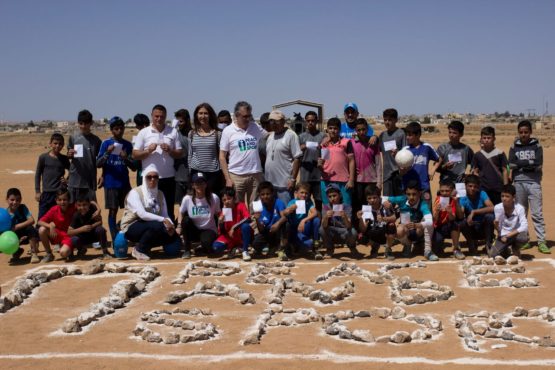 Peace and Sport – the politically-neutral organization which promotes sport as a tool for peace – was at Za’atari refugee camp in Jordan to celebrate “APRIL6”, the International Day of Sport for Development and Peace. In association with the UN Refugee Agency (UNHCR) and the Jordanian National Olympic Committee (NOC), Peace and Sport organized many sports and cultural activities for young refugees. 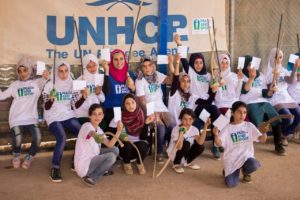 Peace-through-sport activites were led by famous athletes such as:

All actively participated in this day, with the help of NGOs present daily in the camp. In the morning, Aya Medany headed ‘Sport Simple’ workshops for children, organized with the help of various federations in the camp. The idea was to play sports that have been adapted to local resources and environment while transmitting the positive values of sport.

Aya Medany led a fencing workshop. 15 young Syrians made their sword from recycled materials from the camp, then learned the practice of fencing and its values: salute, some fencing techniques but also the respect of the other, notions of protection, strategy development, anticipation, etc.

The delegation also visited a father who made his own table tennis table to play and train his children. He was able to exchange some balls with Olympic Table Tennis Champion Ryu Seung Min. The International Table Tennis Federation  organized several workshops and matches in the camp with young refugees. 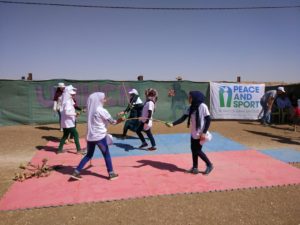 At the same time, Champion for Peace Christian Karembeu joined children to play Teqball together.  Kickboxing champion Tomaz Barada introduced a dozen girls to kickboxing while Taekwondoists from Zaatari Taekwondo Academy made an impressive demonstration with aerial figures and kickbacks!

In the early afternoon, a huge #WhiteCard operation started : 50 children ran in 5-km relay through the camp to pass on the #WhiteCard, the symbol of peace through sport. 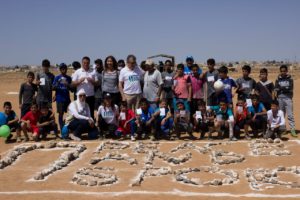 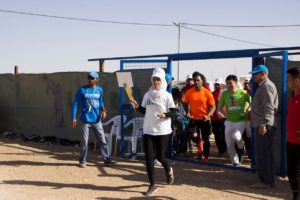 This event was also a focal point for the UNHCR’s #WithRefugees 2018 tour – an international petition to inform the general public and to appeal for support and action from governments and world leaders to help refugees throughout the world.

Joël Bouzou, President and Founder of Peace and Sport said: We are very happy to team up with the UNHCR and Jordanian Olympic Committee to celebrate April 6. It is important for us to bring together a number of sports personalities such as top-level athletes and international sporting federations to work alongside local NGOs committed to helping refugees on a daily basis. Today more than ever, sport can be used as a means to reconcile, to bring a sense of normality and to support social inclusion programs for refugees in communities and in camps. “

Champion for Peace and modern pentathlon athlete Aya Medany said:  “I am very proud to have been able to celebrate this day in Za’atari, and to have taught the values of sport to girls. I have been practicing sport for 22 years, but today is the most important day of my life. All that I have learned during these years, I can give them back today. ”

Many Champions for Peace, ambassadors of Peace and Sport, participated in events on this day.

Peace and Sport was also present in Guatemala for the  second regional Forum for the Americas: Sport for Development and Peace organised on the 5th to 6th April by Guatemala National Olympic Committee in partnership with Peace and Sport. During this event, Peace and Sport signed a memorandum of understanding to promote the “Simple Sport” methodology in Central American countries.

Za’ atari refugee camp is located in the north of Jordan next to the town of Mafraq, close to the Syrian border. The refugee camp was opened by UNHCR in 2012 to accommodate Syrians fleeing violence in their country. It gradually turned into a permanent settlement and now it’s the biggest Syrian refugee camp. It has become one of the largest cities in Jordan with more than 80,000 residents. Many open-air exercise facilities have been built by NGOs and several sports programs have been set up. Some larger caravans enable indoor activities.

ABOUT PEACE AND SPORT

Peace and Sport is an international, neutral and independent organization based in Monaco which promotes peace using the power of sport. Founded in 2007 by Joël Bouzou, Olympic medallist and World Champion of Modern Pentathlon, and placed under the High Patronage of H.S.H. Prince Albert II of Monaco, Peace and Sport works to build sustainable peace by promoting the practice of sport as a tool for social stability. A group of over 80 top-level sportspeople personally committed to the peace-through-sport movement, “Champions for Peace” are one of Peace and Sport’s fundamental founding pillars. They are committed to acting in the field, putting their celebrity and their experience at the service of achieving peace through sport.