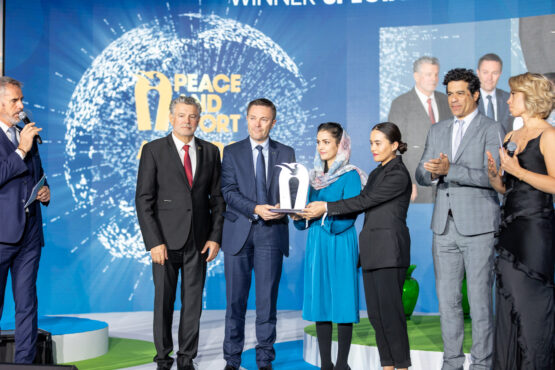 The Union Cycliste Internationale (UCI) is delighted to have received the Special Jury Prize at the Peace and Sport Awards during a ceremony in Monaco on 30 November.

The awards ceremony was held at the end of the 13thPeace and Sport International Forum, which brings together representatives from governments, the international sports movement, international organisations, civil society and the private sector who are involved in actions supporting peace through sport.

The UCI received the Special Jury Prize for its solidarity actions to support female cyclists from Afghanistan by helping evacuate them from their own country following the Taliban take-over in 2021, welcoming athletes to its headquarters in Aigle (Switzerland) and organising the women’s National Championships on Swiss territory.

In 2021, several evacuation operations led by the UCI and its partners enabled 165 Afghan citizens to leave their country with the support of different actors including NGO IsraAID, various governments, the Asian Cycling Confederation, and Sylvan Adams, owner of UCI WorldTeam Israel-Premier Tech. These Afghans, in particular the women cyclists, had been in increasing danger since the Taliban overtook the Afghan capital of Kabul in August 2021.

While some of the athletes were welcomed at the UCI World Cycling Centre (WCC) in Aigle, – the UCI’s training and education centre which also houses the UCI headquarters -, others were hosted in different countries throughout Europe, in Canada and in Singapore.

On 23 October this year, 50 of these refugees were united for the Women’s Road Championships of Afghanistan, held exceptionally in Aigle and jointly organised by the UCI WCC, the Afghan Cycling Federation, the organising committee of the Tour du Pays de Vaud and the Commune of Aigle.

After receiving the award in Monaco, UCI President David Lappartientsaid: “It is an honour to have our work recognised by Peace and Sport. The evacuation of members of the Afghan cycling family was possible thanks to the actions and commitment of many people and organisations, and I thank them all.

“It was incredibly moving to watch these Afghan women compete in their National Championships that started and finished at our UCI World Cycling Centre.The week the athletes all spent together at the centre to prepare for this race was full of emotions and a true demonstration of the role sport can play in bringing people together and helping to heal wounds in troubled times.”

Joël Bouzou, President and Founder of Peace and Sport, said: “The Special Jury Prize of the 2022 Peace and Sport Awards is in recognition of the UCI’s commitment to solidarity and, in particular, its support for the Afghan cycling family. The UCI deployed a great deal of diplomacy to evacuate athletes, particularly female athletes, artists, journalists, human rights activists and leaders of sports bodies after the Taliban took over Kabul.

“At the Afghan Women’s Road Championships in Aigle, the evacuated Afghan athletes came together for the first time since leaving their country. In line with the values of the Olympic movement, the UCI has put sport at the service of promoting peaceful, inclusive societies that respect human dignity. Congratulations to David Lappartient and his teams for the actions taken!”

Also present in Monaco for the award ceremony, Benafsha Faizi, a journalist and former spokeswoman for the Afghanistan National Olympic Committeewho was evacuated through the UCI led operations in 2021, said: “Leaving your country and starting over from zero is very difficult. Thanks to the efforts by the UCI, we are now able to live in a peaceful country where we feel safe and the athletes can practice the sport they love. I want to thank the UCI and all other actors involved for making this possible.

“At the National Championships organised by the UCI World Cycling Centre, it was a great privilege for me to speak on behalf of thousands of incredible young Afghan women who are deprived of their rights to do sport. I hope one day all Afghan girls have the freedom and right to fulfill their dreams and have access to sports and education. ”