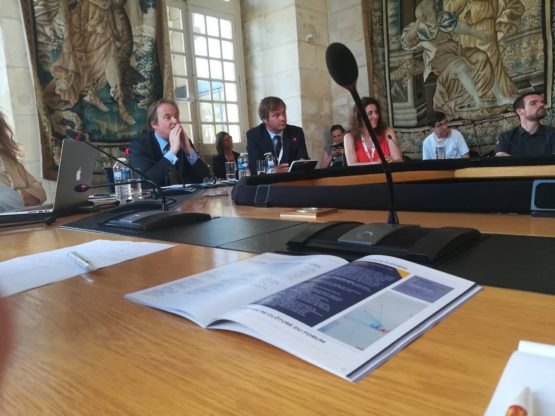 Peace and Sport at the World Forum Normandy for Peace

In the framework of the D-Day Landing commemorations, Peace and Sport spoke about the role of sport in peacebuilding at the 1st World Forum Normandy for Peace taking place in l’Abbaye aux Dames in Caen. Just as Davos is now the primary venue for discussing major economic matters, Normandy intends to become the place where figures from across the globe (leaders, experts, and civil society) come together to discuss about geopolitics and peace.

Alongside the Karate Triple World Champion Laurence Fischer, Peace and Sport General Director Laurent Dupont expressed during the session “Culture and sport: vectors of peace?” how sport can be used in conflict prevention initiatives and as a tool for diplomacy.  Peace and Sport came back on one of the highlights of this year, when at the PyeongChang 2018 Olympic Games the joint North-South Korea women’s ice hockey team participated in a symbolic #WhiteCard photo.

“Sport gives hope where politics fails. Thus, in a historically tense diplomatic context between North and South Korea, Ice Hockey women players from both countries formed a unified team, wearing the colors of a reconciled and reunified Korea. They reinvented the future and sport allowed them to break through barriers that diplomacy alone has not managed to overcome so far. ”

The World Forum Normandy for Peace will be held every year after the commemorations of the D-Day of June 6, 1944 and the Battle of Normandy. The 2018 edition offered two days of conferences, debates on the theme “Globalizing peace: new wars, new peace”, geographic and thematic workshops. Leading geopolitical experts intervene along with representatives of governments, academia and civil society, such as Ban Ki-moon, 8th Secretary General of the United Nations, Antonio Tajani, President of the European Parliament and Setsuko Thurlow, Ambassador of ICAN (International Campaign to Abolish Nuclear Weapons), Hiroshima Survivor and Nobel Peace Prize 2017.