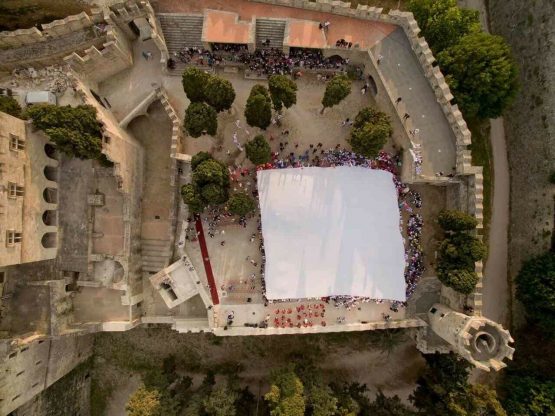 Peace and Sport, the politically-neutral organisation aimed at promoting sport as a tool for peace, has joined forces with the World Taekwondo Federation (WTF) and the European Taekwondo Union (ETU) to organize a major #WhiteCard activation at the inaugural World Taekwondo Beach Championship, in Rhodes, Greece.

A picture with a giant #WhiteCard was taken on May 4th during the Championship’s Opening Ceremony in the Medieval City of Rhodes. The 400m2 white cotton sheet used for the image, involving athletes and organisers, was unfurled in the Bastion of the Grand Master’s Palace, a location representative of the crossroads between Eastern and Western culture.

The value of this #WhiteCard image, however, goes beyond its normal symbolic meaning. The white cotton sheet used for the picture will now be cut into 80 bed sheets and sent to the Kiziba Refugee Camp in Rwanda, where the Taekwondo Humanitarian Foundation runs a pilot project, known as the Kiziba Taekwondo Academy.

“In the current international context, the huge #WhiteCard organized at the Opening Ceremony of the inaugural World Taekwondo Beach Championships 2017 in Rhodes is an important opportunity to send the whole world a message of how peace can be promoted through the spirit of sport.

“Holding a white card like a referee on a sports field is a symbolic action to raise awareness of the contribution sport can make to the global peacebuilding process.  The #WhiteCard campaign was launched by Peace and Sport as a means of highlighting the many activities worldwide that promote peace through sport.”

“This is a fantastic initiative that we as the WTF are happy to support. This will be the first ever World Taekwondo Beach Championship, so it is an important moment for us as a Federation, and to be able to use it as a vehicle to spread the peace through sport movement is an honour for us.

“Our sport is all about respect for each other, and that is why we work so closely with Peace and Sport. We share the same values and together, through initiatives like the #WhiteCard campaign, we can help to make the world a better place.”

So far, the 2017 #WhiteCard campaign, which is anchored around the UN’s International Day of Sport for Development and Peace (IDSDP) on April 6, has reached more than 43 million people across social media since the turn of the year.

In a unique show of unity, the #WhiteCard campaign brought together the North and South Korean women’s ice hockey teams at the 2017 IIHF Women’s World Championships, held in PyeongChang, marking a poignant moment in the well-documented disputes between the two nations.

US Olympic swimming prodigy Katie Ledecky and tennis superstar Milos Raonic headed up a long list of top athletes who posed for a #WhiteCard photo this year, while Paris Mayor Anne Hidalgo and a collection of global sports leaders also took part.

In turn, the campaign encouraged more than 630 community peace projects to be set up, across 150 nations. Olympic pole vaulter Yelena Isinbayeva engaged children from a social rehabilitation centre in Volgograd, Russia in a number of sporting activities, while other high-profile athletes who set up projects included Sergey Bubka, Aya Medany and Palestinian footballer Honey Thaljieh. 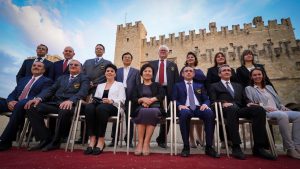