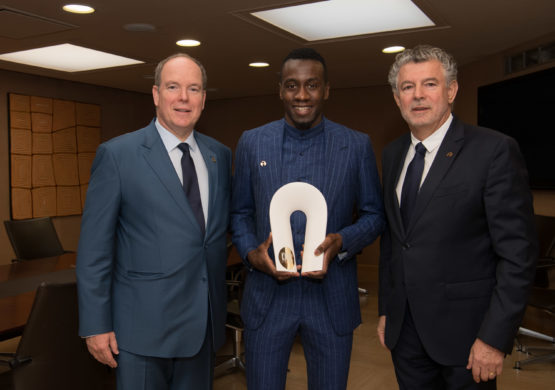 On December 17th, football World Champion Blaise Matuidi was awarded the Peace and Sport Champion of the Year prize in Monaco by H.S.H. Prince Albert II of Monaco and Peace and Sport’s President and Founder, Joël Bouzou. On this occasion he was rewarded for his social commitment and actions carried out by his organization, “Les Tremplins Blaise Matuidi”. His victory had previously been announced at the Peace and Sport Regional Forum which took place in Rhodes, Greece. 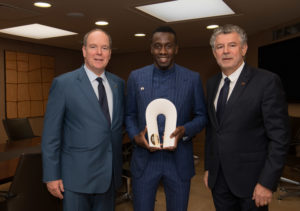 On Monday, football World Champion Blaise Matuidi was awarded the Peace and Sport Champion of the Year prize in Monaco by H.S.H. Prince Albert II of Monaco and by Peace and Sport’s President and Founder, Joël Bouzou. photo: G.Luci / Palais Princier

As a true man of action, in 2016 the sportsman founded his own association “Les Tremplins Blaise Matuidi” to promote social integration and equal opportunities for young people. From organizing sporting events at Clairefontaine, visiting hospitalized children and raising awareness about the cause of orphans to the complete renovation of an orphanage, Blaise and his team have been working daily for over two years… In 2019, he will even build his own orphanage in Kinshasa to benefit children living in the Democratic Republic of Congo.

The 2018 World Champion had the honor of receiving the Award at the Prince’s Palace, presented by H.S.H. Prince Albert II of Monaco and Joël Bouzou, President and Founder of Peace and Sport. He was also given a white jersey in his name – a symbol of peace. This white T-shirt also formally marked his new role as Champion for Peace for the organization. He now belongs to the Champions’ Club, made up of 110 top athletes who are all committed to the peace-through-sport movement.

The player for France and Juventus Turin was very moved: “For me, receiving this award and being named as a Champion for Peace consolidates years of work off the football pitch with my organization ‘Les Tremplins’, through which I’ve been working to encourage youth integration in France and in the Democratic Republic of Congo since 2016. Being presented with this award, especially from Prince Albert II of Monaco, is the culmination of this work.”

Joël Bouzou stated: “Didier Drogba joined Peace and Sport as Vice President last week, and today Blaise has become a Champion for Peace. It’s a wonderful year end for our organization. I’m honoured to have him on board and all members of Peace and Sport are looking forward to working with someone as completely selfless as Blaise, and who shares our values.”

At the Monte-Carlo Bay that evening he met other Champions for Peace including Marlene Harnois, Taekwondo Olympic medallist, Maro Engel, FIA GT World Cup winner, and rally-raid champion Adrien Maré The Champions shared their personal experiences and their activity in field programs with Peace and Sport. 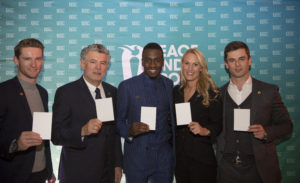 The midfielder for the French national team and for Juventus has no intention of taking it easy in 2019. He will fortify his association, “Les Tremplins Blaise Matuidi” and get involved with the Champions for Peace club.

At first, he will participate in the online #WhiteCard campaign on April6 (International Day of Sport for Development and Peace). He will also closely follow Peace and Sport’s actions, in particular the Friendship Games that will take place in the Democratic Republic of Congo, his family’s country of origin. Finally, he will celebrate the 10th anniversary of the Champions for Peace club at the Peace and Sport International Forum which will be held from 11 – 13 December 2019 in the Principality of Monaco. 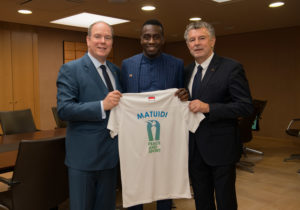