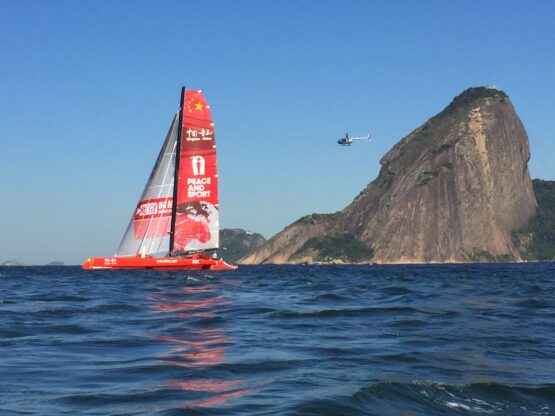 “During the Olympic Games, people have an opportunity to sit together and talk. People forget their differences and forge friendships. There is no distinction between nationality, religion, or skin colour among athletes.” These are the words of Chinese sailor and Champion for Peace, the late Guo Chuan, deceased in 2016, who made a transatlantic crossing to uphold the Olympic Truce for the 2016 Rio Games. His boat sailed under the number 2022, in honour of the Winter Olympic Games that will take place in the Chinese capital.

More than five years later, the Beijing 2022 Olympic and Paralympic Games are fast approaching. 173 United Nations (UN) Member States co-sponsored the Resolution entitled “Building a peaceful and better world through sport and the Olympic ideal” at the 76th Session of the UN General Assembly (UNGA) in New York. This declaration was adopted on 2 December with consensus, calling for the observance of the Olympic Truce from seven days before the start of the Olympic Games and until seven days after the end of the Paralympic Games.

Every day, an incredible variety of stakeholders are making sport a vehicle for peace-building during and between the Olympic Games. At Peace and Sport, we are particularly keen to make high-level decision-makers aware of their challenges and the need to increase the impact of sport-based peacebuilding programs. By bringing realities in the field to the forefront, we can make the promises of sport a reality.

“Actions speak louder than words,” goes the saying, but we believe both actions and words are crucial to foster sustainable change. In order to achieve the UN 2030 Agenda,inclusive public policies guarantee the relevance of actions and words, and field programs cannot thrive without overarching international acknowledgment of sport as a critical enabler. Peace and Sport welcomes this UN Resolution, which recommends that Member States implement sport-based programmes to encourage peace and conflict resolution.

Beyond the Olympic Games, peace through sport is built on a daily basis by committed and inspiring stakeholders. The 2021 Peace and Sport Awards highlighted 11 initiatives which are contributing to a peaceful and better world through sport. We invite you to look at theseremarkable change-makers,whether governmental or associative, using team and individual sports. Each day, these stakeholders propagate the global spirit underlined by the adoption of the 2022 Truce Resolution.