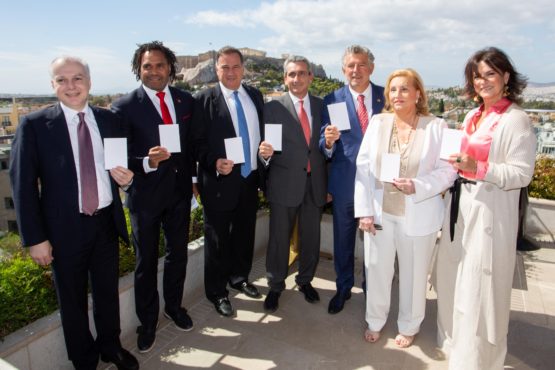 Nikos Galis, Michail Seitis, Michalis Kakiouzis, Christian Karembeu and Marlène Harnois are among the prestigious speakers of the forum on the October 18th.

The basketball legend Nikos Galis has been announced as one of the speakers for Peace and Sport Regional Forum, entitled “Societies in Motion: Rising up through Sport”, which will take place for the first time in Greece, at the iconic island of Rhodes, on October 18th, 2018.

Nikos Galis, who recently became a member of the NBA Hall of Fame, will speak during the Special Session for the Gala Evening of the forum. He will elaborate on the role of sport inspiring new generations, will explain the ways sport can be used for social change and will share his personal story, leading by his example.

Among his myriad accomplishments, Galis led the senior Greek national team to a EuroBasket gold medal in 1987, was named one of FIBA’s 50 Greatest Players in 1991 and holds the FIBA World Cup record for highest career scoring average. Since his retirement, Galis continued to promote the values of basketball and sports in general, inspiring younger generations to embrace athletics and develop themselves through sport.

Michail Seitis not only followed his dream to participate in the Olympic Games, even after a life-changing accident, but also managed to win medals at the European Championships and the World Champion in London 2017, beating the 400m T44 World Record. Kakiouzis is one of the modern legends of Greek basketball history, having led both his clubs and the national team to the top spot on numerous occasions in his long career. Karembeu has an outstanding track record, being World Champion in 1998, winner of the Euro 2000 and winner of the Champions League. Harnois is an athlete but she is also highly involved in sport for development and peace programs in West Africa.

Discussing the Forum, Nikos Galis said: “It is such a great pleasure to be a part of Peace and Sport Regional Forum in my home country, Greece. The value of sport is unique, it is the element that binds people together, both across and within societies.”

Peace and Sport Regional Forum in Rhodes, run by the international organization Peace and Sport in collaboration with the Region of South Aegean, aims to highlight local peace-through-sport initiatives and promote long-term partnerships, for social progress. Expecting to attract more than 350 major decision-makers from across the Mediterranean region, the Peace and Sport Regional Forum will bring together regional Head of States, Nobel Peace Prize Laureates, sports governing bodies, high-level athletes, international organizations, NGOs and academia.

The main topic on the agenda will be “Societies in Motion: Rising up through Sport” and focus will be given on the ways sport can be addressed to create inclusive communities, networks and regional cooperation. A decision-making roundtable with a panel of regional policy-makers will also discuss how to tackle social challenges through sport.

As part of the forum, Peace and Sport will award three international and four regional organizations and individuals who have made an outstanding contribution to peace, dialogue and social change in the world through sport.

Register at Peace and Sport Regional Forum, until the October 16th, here: