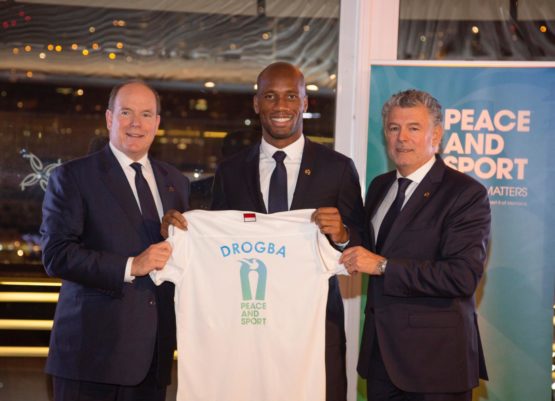 Peace and Sport, the politically-neutral organization whose mission is to promote sport as a tool for peace, is proud to announce that Didier Drogba has been named as Vice President. Football legend and long-time defender of sport for social good, Didier Drogba will actively support the Founding President, Joel Bouzou, in developing the peace-through-sport movement and implementing ¨Peace and Sport’s strategy.

After Peace and Sport’s board meeting on 10 December a press conference was held on Tuesday 11 December at the Monaco Yacht Club in the presence of President and Founder Joel Bouzou and the organization’s patron, His Serene Highness Prince Albert II of Monaco in order to appoint Didier Drogba as Vice President of the organization. 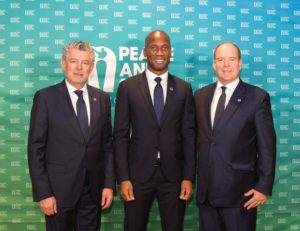 Yesterday afternoon at Monaco Yacht Club, Didier Drogba was named Vice President of Peace and Sport, next to President and Founder Joël Bouzou and His Serene Highness Prince Albert II of Monaco.

A true man of peace, Didier Drogba’s personal background and engagement have already led him to perform sport diplomacy actions. In 2005, after leading his country – Cote d’Ivoire – to qualify for the 2006 World Cup, Drogba and his teammates launched an appeal for his country to lay down their arms in the midst of civil war. Two years later in 2007 he set up the Didier Drogba Foundation to facilitate health and education for the most vulnerable communities. A Peace and Sport Champion for Peace since 2017, he has greatly helped the organization’s field programs, notably with young people in Colombia.

Drogba explained “I was determined to become more involved with Peace and Sport and to actively support its president Joel Bouzou to ‘give back’ all that sport has brought me over the years. My 25-year career has given me a certain amount of fame and I’ve built up a network. I now want to use my voice to bring positive change in the world”

Joël Bouzou added: “It’s a real pleasure and honour to welcome Didier onto Peace and Sport’s Board of Directors in this key post of Vice President. We are sure that his support will strengthen Peace and Sport strategy and create visibility about the positive power of sport”

Starting in 2019, Didier will mobilize his global audience and his network of athletes, businesses and organisations and invite them to join the cause of peace through sport. He will also work to expand the Champions for Peace club, raising awareness amongst top sportsmen and women with high media visibility to involve them in Peace and Sport’s field projects.

Founded in 2007, Peace and Sport is based in Monaco and placed under the High Patronage of H.S.H. Prince Albert II of Monaco. The organization works to build sustainable peace throughout the world. To achieve this, it promotes the practice of structured sport and its values as a tool to educate young generations, and as a vehicle for social stability, reconciliation and dialog between communities.