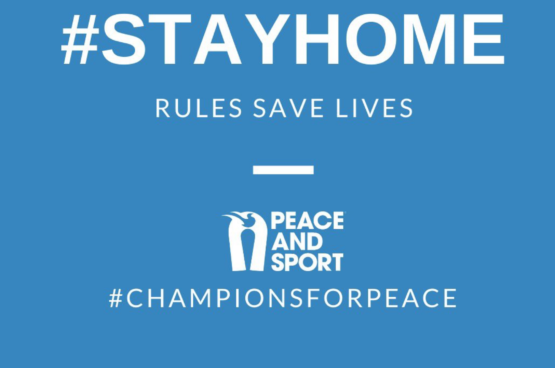 Sport has previously played an important role in difficult times. In the current global health emergency, the power of sport has transcended playing fields and it is sending a strong message of hope in the future. Since last Sunday, a group of Champions for Peace, a collective of more than 116 high-level athletes, have used their voice, fame and social media accounts to call the sports community to promote global cooperation and mitigate the spreading of the virus.

Soon after some countries started to close their borders and the growing restrictive measures, videos and online messages across the world started appearing on the social media accounts of Champions for Peace, including France Football World Cup winner Blaise Matuidi, tennis player Tatiana Golovin, rugby player Hugo Bonneval and Olympic medallists Pyrros Dimas, Pascal Gentil, and Benjamin Boukpeti stepping up for solidarity and generous citizenship through the hashtags #StayHome and #WhiteCard.

“As a Champion for Peace, committed to building a better world, I believe that sport’s contribution to development and peace includes the promotion of a healthier and safer world”, posted Marlene Harnois, French taekwondo Olympic medallist, and Champion for Peace.

Since 2009, Peace and Sport, the politically-neutral organization based in Monaco, mobilizes its Champions for Peace to spread the organization’s vision across the world around the power of sport for good and to lead peace-through-sport field programs.

For its President and Founder, Joël Bouzou: “Today more than ever sport can inspire, give courage and hope for the future. Our Champions for Peace and athletes, in general, are role models who can bring fresh energy and enthusiasm to enact more cooperation than ever before. They can inspire the youth and spread the positive values of sport including team spirit, respect to the rules and commitment which are incarnated behind a #WhiteCard.”

The Champions for Peace mobilization echoed the vibrant intervention of Blaise Matuidi. The latter addressed his fans in a video message: “We must realize that this disease can affect us all, us, our families, our loved ones, our friends. It is important to be aware of things and to respect the instructions […]. If you can, stay at home, take care of yourself, your families, your loved ones. We must think of those who suffer, and the medical personnel who is fighting on a daily basis. I have a big thought for them. Without them, the situation would be even more difficult.”

The raising awareness campaign launched by the Champions for Peace comes on the eve of the annual International Day of Sport for Development and Peace celebrated on April 6th. Together, they will continue their commitment to promoting a more united world through the #WhiteCard symbol. #WhiteCard, which makes reference to the red and yellow card in the sports world, is a global digital campaign created by Peace and Sport to promote the positive and constructive values ​​of sport.