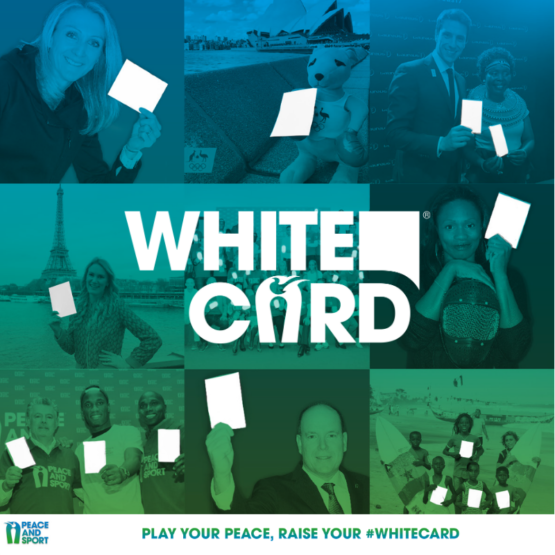 This year, from the principality of Monaco, Peace and Sport spurred an outstanding international April6 mobilization around the symbol of the #WhiteCard to send a message of global cooperation in times of a worldwide health crisis. The 2020 #WhiteCard digital campaign reached 117 million on social media. It was marked by 209 digital initiatives registered on www.april6.org and an extraordinary upsurge of creativity and unity in numerous countries, notably in France, Monaco, Ukraine, Pakistan and the United States, where numerous international organizations, governments, sport federations, National Olympic Committees, clubs, NGOs and athletes participated in the campaign.

Following a call for mobilization from H.S.H. Prince Albert II of Monaco, Patron of Peace and Sport, on April 4th, Champions for Peace responded to the appeal and many of them raised awareness among their fans by posting #WhiteCards on social media including President of Paris 2024 Tony Estanguet, 1998 football world champion Christian Karembeu, Olympic champion in athletics Yohan Blake and football legend and Peace and Sport Vice-President Didier Drogba.

Set up by Peace and Sport in 2014, the #WhiteCard campaign, which so far has reached over 376 million people worldwide on social media, invites people to take pictures of themselves with white cards, then sharing them on social media.  Each year, from the Principality of Monaco, Peace and Sport mobilizes an increasing number of actors with 98 million people reached in 2019 and 117 million in 2020. This year’s theme “Play your Peace, Raise your #WhiteCard” encouraged people to use sport as a tool for global cooperation, hope and unity to support the fight against the pandemic.

For Joël Bouzou, President and Founder of Peace and Sport: “This 2020 #WhiteCard campaign was amazingly successful reaching 117 million people on social media. I would like to thank H.S.H. Prince Albert II for His great support, Didier Drogba my Vice-President,  all the participants, particularly the international sport federations, the national Olympic committees, international organizations, athletes, and our Champions for Peace for coming together as a ‘global team’ to share a universal message of hope and global unity through sport. We can be proud that our universal reach, which has mobilized ‘the global team’ thereby creating unity within diversity, has contributed to saving lives all around the world. These results are a source of pride for our organization, but also more generally for the Principality of Monaco. ”

Elsewhere, international organizations such as the UN Department of Economic and Social Affairs (UNDESA), the United Nations Mine Action Service (UNMAS) and UNESCO participated in the #WhiteCard campaign alongside with governments such as the Foreign Affairs of Mexico, the Ministry of Youth and Sport of Portugal and the Ministry of Education, Science, Culture and Sports of Georgia, creating national dynamics and generating tremendous support to the #WhiteCard campaign. In France, following the example of Champion for Peace and President of Paris 2024, Tony Estanguet, the greatest French champions brandished their “White Cards” on their social media. Around the last flag bearers of the French delegation, Laura Flessel and Teddy Riner, no less than 40 world and Olympic medalists called on their communities to unite around the positive values of Sport.

Besides the #WhiteCard campaign, the International Day of Sport for Development and Peace brought people together digitally through the www.april6.org platform. As such, the Georgian Sports Ministry launched an “I stay at home and train” competition inviting families to practice sport at home and share a video on social media. The Sport Academy based in Brussels proposed an international webinar on sport for development and peace in four languages. TIBU Maroc, a leading organization in education through sport, with the support of the Ministry of Education of Morocco, initiated a program “Sa7ti Friyadti” providing digital content to 4000 families encouraging them to adopt a healthy and active lifestyle while staying at home.