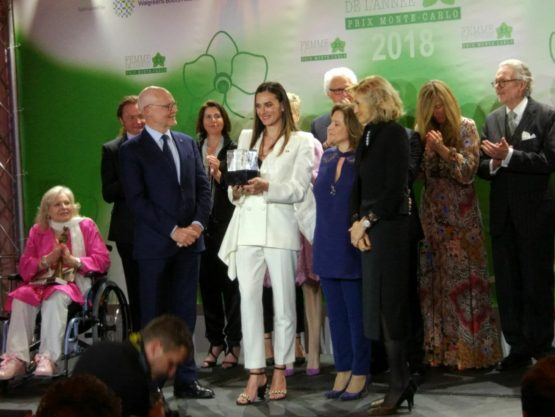 During the seventh edition of the Monte-Carlo Woman of the Year Award 2018 themed “Women and Sport”, Yelena Isinbaeva, double Olympic gold medalist and three-time World pole vault champion, received an Award for her commitment as Champion for Peace with Peace and Sport.

The women’s pole vault world record holder was rewarded in recognition of her exceptional involvement promoting peace, dialogue and social cohesion. In 2009, Yelena joined Peace and Sport as Champion for Peace. This club allows committed athletes to put their notoriety and experience at the service of field projects that uses sport to tackle social issues.

Her own experience as Champion for Peace led her to create her own Foundation in 2012 and to help disadvantaged to have access to sport. Every year, through her Foundation, Yelena organizes remarkable events to celebrate the International Day of Sport for Development and Peace on April 6th activated by Peace and Sport.

“I have always believed in the role that sport can play in bringing people together. As a Champion for Peace, I can concretize this conviction and give it a more universal dimension.”

Joel Bouzou, President and Founder of Peace and Sport added:

“Champions for Peace are true role models for youth and we believe they can share the positive values of sport through their commitment. I am very proud that Yelena is acting alongside Peace and Sport and I would like to congratulate her again for this award, which highlights her enduring commitment to peace and development through sport. ”

Today, the Champions for Peace club gathers more than 100 women and men from 40 different countries. They are committed to make sport a tool for dialogue and social cohesion.

The Monte-Carlo Woman of the Year Award is an international award that aims to distinguish women from around the world for their personal or professional actions, whatever the sector concerned. It is placed under the High Patronage of S.A.S. Prince Albert II of Monaco and with the honorary presidency of S.A.S. Princess Charlene. The laureates were selected by an independent commission, chaired by the Founder of the Award, Mrs. Cinzia Sgambati-Colman, also director of MonteCarloin.