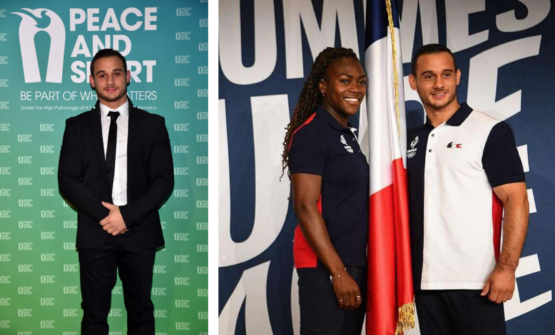 Samir Ait Said will carry the tricolor flag at the opening ceremony of the Tokyo Olympic Games, on July 23rd, alongside Clarisse Agbegnenou. Samir Ait Said succeeds other Champions for Peace such as Tony Estanguet, Laura Flessel and Marie-José Pérec.

Samir Ait Said holds one of the finest achievements in French gymnastics and his career illustrates the transformative power of sport. After his terrible injury at the Rio Olympic Games, he demonstrated to be a person with a morale of steel by redoubling his efforts to achieve his Olympic dream:  he is a symbol of perseverance and discipline for athletes, as well as a source of inspiration for young people.

Member of the Champions for Peace Club since 2017, Samir Ait Said participated in the International Peace and Sport Forum, in 2017 and 2019. Each year, Samir gets mobilized for April 6, the International Day of Sport for Development and Peace, by raising a #WhiteCard, symbol of the peace-through-sport movement, and by encouraging other athletes to support the movement.

Peace and Sport is delighted with the selection of athletes who will represent France at the opening ceremony of the Tokyo Olympic Games. These are athletes who embody the structuring values of sport, who assume an essential advocacy role and who are committed to building more inclusive and equitable societies.