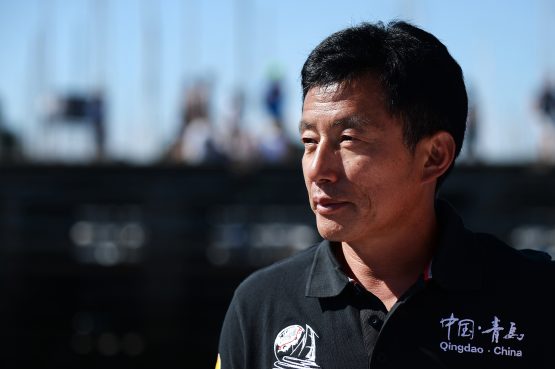 Champion for Peace Guo Chuan has sadly been lost at sea during his attempt to beat the world record for a one-man crossing of the Pacific. The Chinese sailor left San Francisco on 18 October with the goal of reaching Shanghai in less than 20 days.

“Guo Chuan had greatness in his natural modesty, in his way of looking at the world, and he looked far beyond it.  Above and beyond the waves, far across the vast ocean. He dreamed of exploits and he achieved many. But this wasn’t the most important thing. Neither was money. Guo Chuan understood that our planet is small, small enough to sail around, and he wanted to use his fame to show everyone that in sailing round the world he saw no frontiers. He wanted to encourage mankind to better share the oceans of this small planet Earth and to live together in peace, looking beyond cultural divides, and enriched by the wealth of differences.” said Joël Bouzou, President and Founder of Peace and Sport

Guo Chuan always associated his athletic exploits at sea with a message of peace. Last year, he beat the world record for crossing the Arctic with a French, German and Russian crew whilst flying the colours of Peace and Sport, saying prior to his departure that “As a Champion for Peace I want to spread the spirit of peace through sport to a maximum of people.”

This year, the Chinese mariner promoted the Olympic Truce prior to the Rio Games, firstly by carrying the torch on the Rio-Antirrio bridge, then by visiting the city of Carioca on board the ‘Beijing Time’ whose sail sported Peace and Sport’s logo, reminding us that “during the Olympics, people have the opportunity to meet and interact, to forget their differences and to create friendly relationships.” Before their departure for Rio, the Chinese skipper and his crew were keen to honour the memory of all victims of terrorist attacks by placing flowers in water.

“Today, a great sadness affects the large Peace and Sport family, in particular our Champions for Peace club, of which he was part. But his commitment, his optimism, his modesty, his will and his vision will remain forever in our hearts and in our minds to continue to advance the cause of peace through sport everywhere,” continued Joël Bouzou.

“I had the honour of meeting Guo and visiting his boat before his departure. An adventurous dreamer, full of beliefs and values, driven by courage and the desire to share. I am deeply saddened by his disappearance. Dedication and commitment carry risks. May his magnanimous soul forever find serenity nursed by the waves of the ocean” said Champion for Peace Pierre Frolla, world record-holder in free-diving.